Welcome to Liverpool Street! This is a highly authentic reproduction of the real Liverpool Street IECC right down to screens, signals, points, tracks, and timetables. Liverpool Street is probably the best known of all the IECCs, perhaps because it was the first and was well publicised. Such information has helped me to get the simulation as real as possible, along with much help from friends in the business.

About the real IECC

As mentioned above, Liverpool Street was the first IECC to be commissioned on British Rail, over Easter 1987. At the time it was one of the most advanced control centres in the world with practically everything done electronically rather than using relays.

There are actually four IECCs within Liverpool Street IECC. Yes, that means that the term 'IECC' actually refers to two things: the set of equipment that makes up an IECC system; and the building (control centre) which houses the equipment. One IECC was not powerful enough to control the entire line, due to the complexities of it all.

What you will be seeing is a large chunk of IECC 'A', which covers the Liverpool Street to Bethnal Green area, and also (not in this simulation) Hackney Downs to Chingford. There is enough concentrated activity in that area to require two signallers during the rush hours! As such, there are two workstations which actually allow both signallers access to the same area. There is an agreement between the signallers as to who will actually control what. The split tends to be platforms 1-10 at Liverpool Street, the Suburban Line, and the Fast Line from Bethnal Green, with the other signaller controlling the Main Line, the Electric Line, and platforms 11-18.

The other three IECCs, 'B', 'C', and 'D', control the rest of the line to Southend and towards Ipswich, along with the branch lines, and the West Anglia lines to Stansted and Cambridge (exclusive). Each has two signallers. 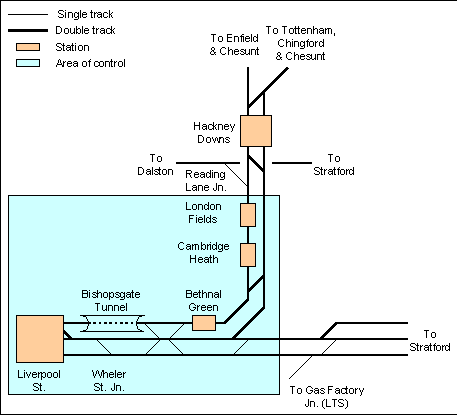 No train delays or equipment failures

A typical day; some train delays and equipment failures.

Two eras are available; 'Before 2013' and '2013 onwards'. The only difference between the two is the name of some lines; track layout is unchanged. The correct era must be selected for ARS to route trains correctly.

ARS on: Tick to enable ARS in the simulation.

Full ARS is provided, and in general could work the simulation independently. However, should trains be routed towards you on the wrong line, or be booked to join or share a platform at Liverpool Street, you will need to step in and set those routes manually.

Liverpool Street has two fringes, one with the Hackney Downs signaller and one with the Stratford signaller, both co-located in the same building.

The Hackney Downs signaller can send some trains down either the Suburban or Fast lines, as long as they haven't just come off the Reading Lane Junction curve or if they stop at Cambridge Heath or London Fields. Note that trains reversing at London Fields between Hackney Downs and the North London Line will appear and then disappear at London Fields. They may also appear pink (non-ARS).

You can request the Hackney Downs signaller to send all trains down one line if necessary by using the special train description of 'BLOK' in the first berth under your control on the appropriate line. The signaller will see that appear on his panel and send future trains on the other line if he can. The berths are 0122 on the Fast line and 0120 on the Slow line, at Cambridge Heath.

Because of the large number of crossovers between Electric and Main lines, you will get a number of trains coming in off their timetabled path if the Stratford signaller decided to re-route due to congestion or other reasons. You will need to put them back on the planned path for ARS to start routing automatically. Look at each train's timetable though, since the train might be timetabled to cross at Bethnal Green anyway, and so changing lines is not needed. Not only that, but you will "wiggle" the train, the crossovers restrict the speed of the train (approach controlled) and you may delay other trains.

As with Hackney Downs, you can request the Bow signaller to send all trains on a different line. Interpose BLOK into berth 0220 on the Main line and 0222 on the Electric line.

Either fringe signaller may ask you to send trains on the other line rather than their booked line. If he does this, the word 'BLOK' will appear on the outgoing line. You should then avoid routing on that line, and you will lose score if you do. This will start to happen a few minutes after getting the message to allow any trains already on that line to pass through which are unavoidable.

Call-on routes are allowed into the platforms at Liverpool Street. This is selected by the interlocking at routesetting time when the platform track is occupied. Therefore, if a train is on its way to the platform, but hasn't yet entered it, do not overset a call-on route until the train is actually in the platform.

Point locking is effective on certain points which are located immediately beyond a signal. This means that the points cannot be moved for a time period after the berth track circuit to the signal has been occupied. The overlap has been timed to release at this time also, so when the overlap releases, so does the point locking and you will be able to (subject to other conditions, of course) move the points again. This protection is to avoid the possibility of an overrunning train rolling into the points which are being moved from normal to reverse or vice versa, thus derailing the train and damaging the pointwork.

Note that Signal 57 applies to trains heading to the Down Main from platforms 5 to 10 and platforms 11-14.

Some of the automatic signals have delayed yellow facilities. This is where the overlap beyond the signal in front is not completely clear but this signal clears to a single yellow once an approaching train has been timed to come to, or nearly to, a stop at this signal. If the overlap clears before a train arrives, then the signal will clear as per normal.

This is an Adobe Acrobat PDF file. If you don't have Adobe Acrobat Reader installed on your computer you can get a free download of the latest version from

All signals are controlled by Liverpool Street IECC, and plated 'L' on the ground.

Without going into great detail, the linespeeds are approximately as follows:

There are no timetable locations provided for reversals behind the shunt signals in the station throat.

Timetabling for Liverpool Street is pretty straightforward. Most up trains will have an entry point of Up Electric, Up Main, Up Fast, Up Suburban, or Reading Lane Junction, and will have key locations of Bethnal Green and Liverpool Street. Cambridge Heath and London Fields are optional locations which only need to be specified if the train actually stops there.

There are four line and path codes: SL (Suburban Line), FL (Fast Line), ML (Main Line), and EL (Electric Line). Trains entering at Reading Lane Junction or Up Suburban will have a path code of SL inserted automatically at Bethnal Green. Up Fast trains must have it entered manually, since it can use either SL or ML at Bethnal Green. Similarly Up Main trains must have either ML or EL specified, but Up Electric trains will have EL inserted automatically.

The line code at Bethnal Green is carried forward from the path code, so you do not need to specify it unless the train changes line after Bethnal Green.

A platform must be specified at Liverpool Street for arriving and departing trains.

Departing trains from Liverpool Street must have a line code specified, even if it doesn't have a choice.

Trains on the SL or EL can have a different line code specified, i.e. FL or ML respectively. Otherwise, the line code is carried forward from the path code as before.

The following destination codes are used:

Note that trains running to Liverpool Street show the letter appropriate to their point of origin.

SimSig is not responsible for the content of external links. Links may change over time.