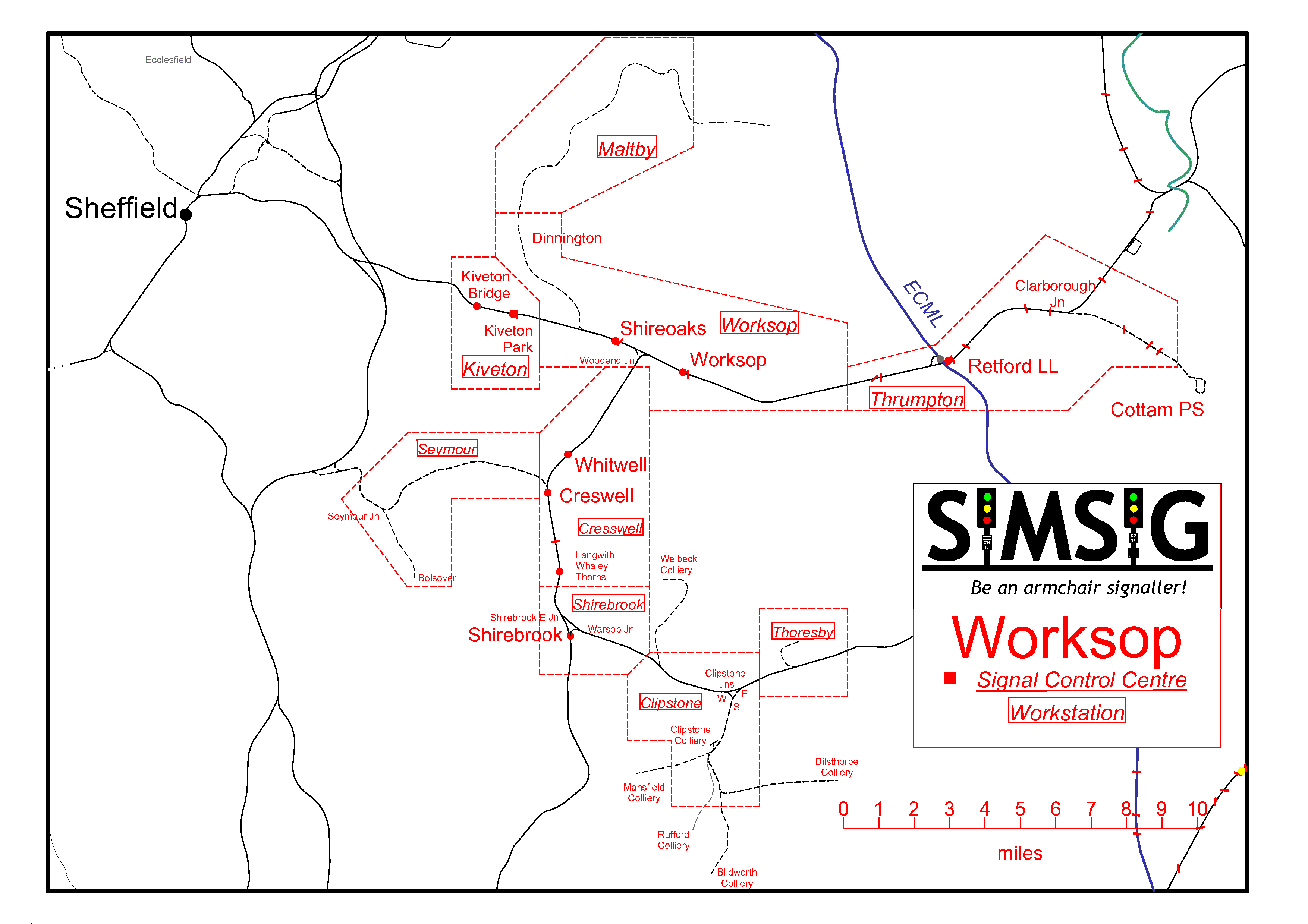 The Worksop simulation covers an area stretching from Mansfield and Woodhouse Junction in the West to Cottam and West Burton Power Stations in the East. Also included are numerous colliery lines as well as the single line to Doncaster in the North of the area. Numerous signal boxes are covered by this, the largest of which is Worksop itself. As well as various signal boxes the Worksop simulation accurately simulates various methods of train signalling. As part of the simulation both power signalling and mechanical signalling is recreated. All lines in, through and out of the simulated area are non-electrified.

The simulation is an accurate account of the area. However, for various reasons, some artistic licence has been used in several locations. This is particularly true in areas covered by mechanical boxes and Absolute Block signalling. For example, some track has been track circuited that would otherwise not be and several crossings have been upgraded to remove the need for the crossing box (as would most likely be the case if the area was ever converted to IECC control).

(This is based on the Modern Era)

Starting from the top of the screen you have the area controlled by Maltby box. The lines from Doncaster come in from the left with the Up South Yorkshire line being at the top and the down line at the bottom, to converge at St Catherines Junction. The next feature encountered is Firbeck Junction where the line to Harworth Colliery joins the by now South Yorkshire single line. Next comes the area around Maltby Colliery itself, with the single South Yorkshire single line at the top, the Arr/Dep loop in the middle and the through line to the Colliery/Bunker line at the bottom. The single line now continues to the right and Dinnington Junction.

The next area below are the lines around Seymour Junction box, the lines enter from Hall Lane Junction on the left. A series of crossovers form Seymour Junction itself where the lines to Bolsover and Oxcroft collieries part, with the Bolsover line being at the bottom of the panel display and the line to Oxcroft at the top. Just beyond OXFI signal the line to the colliery at Oxcroft branches off to the lower right leaving a now closed single line to connect to the main lines at Creswell.

Below the control area for Seymour is the start of the control area for Shirebrook box. Trains will enter the simulation several minutes before the first track circuit of Shirebrook’s occupies. The area between Mansfield and the approaches are under the control of Kirkby Summit box and this area is simulated as part of the approach to this simulation - therefore users should be aware that this will include trains that terminate at Mansfield Woodhouse station, but they are not under your control. Trains now approach Shirebrook station itself, which is followed immediately by Shirebrook Junction, where the access is available to the wagon works and the lines towards Welbeck and Clipstone branch off to the lower right. Continuing towards Worksop the main lines pass Shirebrook East Junction which is the top leg of the Shirebrook triangle with the lines from Clipstone via Shirebrook South Junction joining from the right. The line now continues through the station at Langwith Whaley Thorns and heads towards Creswell station and signalbox. Between Shirebrook East Junction and Creswell trains pass over Norwood Crossing which is controlled by a ground frame.

As trains approach Creswell station they pass over a ground frame controlled crossover and enter the station area. On departure a now closed line towards Seymour Junction leaves to the upper right. Shortly after passing Creswell’s last signal trains will pass through Whitwell Tunnel and station heading towards Woodend Junction, which is under the control of Worksop signalbox. At Woodend Junction a single line heads off to the upper left leading to Shireoaks station on the lines towards Woodhouse Junction. Once past Woodend Junction trains head towards Shireoaks East Junction to join the main lines from Woodhouse Junction.

The other main entry into the simulation from the West are the lines from Woodhouse Junction, these pass over three sets of catch points to pass through Kiveton Bridge and Kiveton Park stations. At the Worksop end of Kiveton Park station is Kiveton Park level crossing controlled by CCTV from Kiveton signalbox, continuing towards Worksop the lines pass over Brancliffe East Junction where the Up and Down South Yorkshire lines from Dinnington Junction and Maltby join from the upper left. Trains now enter Shireoaks station with Shireoaks CCTV crossing immediately to the east of the station platforms. It should be noted that the protecting signal on the up line is before Shireoaks station, although trains heading towards Woodend Junction via the single lead onto the down line do have a signal at the end of the station platform to protect the level crossing. Shortly after leaving Shireoaks station, the single lead junction towards Woodend Junction leaves to the lower right.

Passing Shireoaks East Junction the lines from Creswell join from the lower left and then pass between the Worksop Up and Down Sidings to enter Worksop station via Worksop West Junction. On leaving Worksop station trains pass over Worksop crossing and the loco siding on the down side. Heading towards Thrumpton panel, the lines pass Manton Junction, with the connection to Manton Colliery leaving to the lower right before passing over both Mansfield Road and Rushey Sidings Crossings, the first of which is controlled by CCTV and the second is a set of automatic half barriers.

At Thrumpton West Junction the connection to Retford High Level on the East Coast Main Line leaves to the upper right with the main lines continuing into Retford Low Level Station. On leaving Retford Low Level Station trains pass over Thrumpton CCTV crossing and pass Gringley Road Loop which is adjacent to the up line, at the Clarborough Junction end of this loop trains pass over Gringley Road crossing. On screen there is a screen break with the lines dropping down below Thrumpton West Junction to pass over the telephone crossings at Cherry Halt and Caddows Lane to arrive at Clarborough Junction itself.

Trains from Shirebrook Junction and Shirebrook East Junction converge at Warsop Junction and then pass by the Shirebrook Up Sidings. As trains continue towards Clipstone they will pass by the Shell Mex Siding access to which is by ground frame from the up line only. Control of trains then passes to Clipstone box passing Welbeck Colliery and Colliery Junction to arrive at Clipstone West Junction, where a triangular junction is formed with the lines to and from Bilsthorpe Colliery. The main lines continue over Clipstone West and East Junctions to head towards Thoresby Colliery.

Thoresby Colliery is accessed by a single lead junction into a series of four loops, the northern most one of which is used as a run round loop with the actual connection to the colliery sidings themselves leading directly into and out of the loop lines. It should be noted that there is no direct access to and from the main lines.

At present the lines east of Clipstone Colliery Junction are not in regular use at this time.

Freight traffic mainly consists of coal trains centered around Worksop itself and radiating to the collieries at Thoresby, Welbeck, Maltby and Redcar as well as imported coal from Immingham, this all transported to the various Cottam and West Burton Power Stations and is provided by a variety of operators (DB Schenker, GBRf & Freightliner Heavy Haul). GBRf also work gypsum traffic from West Burton to New Biggin.