The area is mostly double track, with a short single track section over the Britannia Bridge. The Blaenau Ffestiniog branch is single track throughout, with a short passing loop at North Llanrwst Station. There are nine ground frames within the simulated area.

The simulation is based on information around 2005 to the present day.

The simulation consists of sixteen signal boxes, which are represented as individual workstations:

Geographically, North on the panel is up, East right, South down and West left.

The section from Llandudno Junction to Llanrwst Signal Box (situated at North Llanrwst Station) is controlled in real life by Electric Train Token, but in SimSig North Wales Coast by a modified version of the Absolute Block system described above.

Above each TOL indication is an arrow which will change direction to show which direction trains are locked into the system.

It is necessary for all trains to be offered on this single line – no acceptance is possible without an offer first being received.

The section of line from Signal LT3 at North Llanrwst through to the buffer stops beyond Blaenau Ffestiniog is controlled by the No Signaler Key Token system (NSKT). Only one token can be released at a time to allow a train to traverse this section of line.

The system is controlled by the token instrument located on the screen next to North Llanrwst. 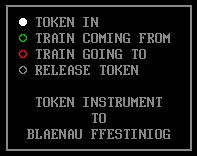 When the token is released the red "Train Going To" light will illuminate. This will give a release on signal LT3 allowing a route to be set towards Blaenau Ffestiniog.

The token can be released in advance of the train arriving at North Llanrwst.

Note: The indication on the token instrument will remain at "Train Going To" this is true to real life.

When the train returns and either stops at, or passes through the platform at North Llanrwst the token will automatically be restored to the instrument, returning it to it's original state.

Locking Inside at Blaenau Ffestiniog

If a train is booked to stand in the loop at Blaenau Ffestiniog, it will depart to the reversing point at either Number 2, or Number 3 ground frame, the ground frames will then need to be operated as normal (Only one frame can be released at a time, as they are released by the token). Once the train has come to a stand in the loop, and the ground frame has been locked, you will receive a telephone call from "Blaenau Ffestiniog Token Hut", the caller will ask your permission to restore the token to the instrument. When you press OK the token instrument will return to it's original state.

When a the train is ready to depart from the loop at Blaenau Ffestiniog, the TRTS roundel will begin to flash, and a telephone call will be received asking for permission to remove a token from the instrument. When you press OK the green "Train Coming From" light will illuminate. The relevant ground frame(s) can then be operated to release the train onto the single line.

When the train returns and either stops at, or passes through the platform at North Llanrwst the token will automatically be restored to the instrument, returning it to it's original state.

At startup, there are the following options:

This can be turned on or off. The default is TORR enabled. Turning off TORR does not affect Llandudno Junction workstation, as this is an NX panel in reality. To turn off TORR, untick the box on the options screen.

Choose the scale of train delays and infrastructure failures. The normal SimSig options of “None”, “Low”, “Medium” and “High” are available. Select which one you wish to play from the drop-down menu.

There are several types of Level Crossing in North Wales Coast:

With MCB and CCTV crossings, you will be penalised if:

Multiplayer and Chaining There are numerous variations for multiplayer sessions of North Wales Coast.

Since June 2020 the introduction of Chester allows for chaining with North Wales Coast.

Pressing the following hotkeys will centre the screen as follows:

The Plan also contains the approximate locations of signal boxes, taken from the Quail maps. The symbol is either a rectangle with a circle and line in it, or a square box with a cross in it, depending on space available.

* Fringe box, signals not controlled in this simulation.

*1 Part of Llanrwst panel, but controlled from the two Blaenau Ffestiniog ground frames.