Welcome to Southampton! This simulation covers a large part of the Southampton area, which is controlled by Eastleigh PSB (prefix E). As well as the constant stream of passenger workings, both EMUs and DMUs, you will also have to contend with a large number of freight workings to, from, and through the large terminals in the area.

As already mentioned, Southampton is controlled by Eastleigh PSB, which also controls Eastleigh itself, Fareham, Totton, and Romsey. It is large entrance-exit (NX) panel built a few decades ago, although some equipment has been updated since. 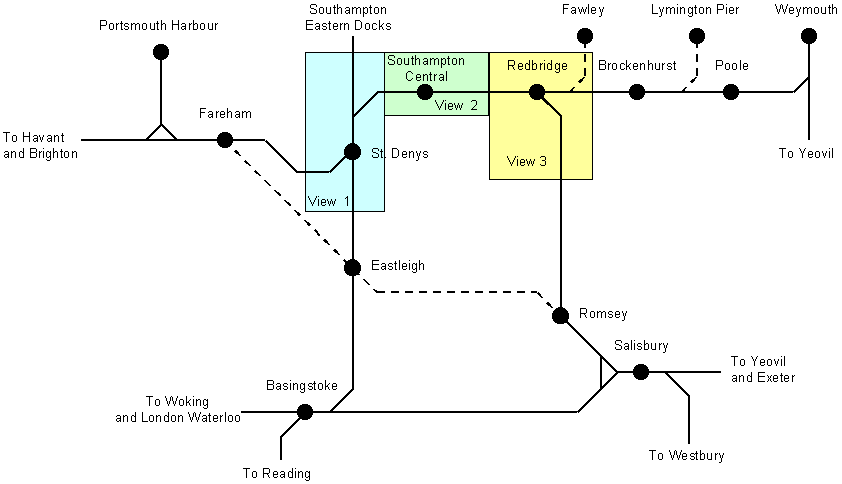 Four through platforms with a combination of both through and terminating trains make this a busy location.

The trains themselves will stop at the end of the platform most appropriate to their next move - the near end (in terms of approaching the platform) if the next move is back out the same way (reversal), or the far end if the next move is to continue in the same direction (through train). Be careful to remember this if sending a second train into the platform. Note that the Eastleigh signallers cannot see where the train has stopped either!

This station forms the junction between the Eastleigh and Fareham lines. The track layout is not ideal for non-conflicting moves and the section over Adelaide Road Level Crossing is on a tight bend, making moves over it quite slow in comparison to the Eastleigh line.

Note also that the Fareham branch has long signal sections, so routesetting is not necessary until after an approaching train has passed its last green signal. By contrast, the Eastleigh line has four aspect signalling with short sections, making the approach to St. Denys quite quick.

This island platform is only served by trains on the slow lines between Redbridge and Southampton Central. Be careful to ensure you route trains stopping at Millbrook onto the slow lines. Such trains are usually the all-station stoppers.

This station was, until recently, called Lyndhurst Road. It is used by local trains, usually all-station stopping trains.

This loop, just to the west of Southampton Central, is available for passenger and freight use. Note that the Down Fast line, running parallel, can also be used, but not any other line.

This loop, on the opposite side of the line to the Down Loop, is available for freight use only. The adjacent Up Fast may also be used, but not any other line.

The Yards, Docks, and Sidings

Nearly all the yards, dock areas, etc. will only accept a train when the shunter in charge (not you, the signaller!) has pressed the Shunter's Release plunger (indicated by the letters SR with a roundel (button) on the screen). This will happen when (1) the route is set into the yard (grey arrowhead); (2) the train description is correct for that train; (3) the train is approaching the yard; (4) that train is destined to go into that yard.

To send a train into one of the yards, route the train into the exit (grey arrowhead) as early as possible (to allow the shunter to reach the yard entry point, set the points, press the SR plunger, etc. without delaying the driver). As the train approaches, you will see the shunter's plunger, normally hollow, become solid for a few seconds, indicating that the points are set correctly within the yard, so the train can enter. As the train begins to enter the yard, the plunger reverts to hollow.

Note that these are not slots - clicking them has no effect.

Trains coming out of the yard will have their train description interposed into the departure berth. The train will be ready a minute or two later. Set the route out of the yard manually as normal.

Most of the lines are electrified on the DC third rail system. Those that aren't are indicated on-screen. You shouldn't have a problem unless you try routing a passenger train onto a goods line, which is generally not advised anyway!

There is a range of two-, three-, and four-aspect signalling, along with repeaters, and ground shunt signals.

There are a couple of main routes where an alternative warner route is available. This is indicated by a yellow exit triangle at the exit signal. By clicking on this exit triangle instead of the main signal, you get a reduced overlap. This allows movements by other trains not normally possible with a full overlap, but restricts the speed of the first train. If a forward route is set (beyond the exit of the warner route), the warner route will automatically step up to a main route but only if the conditions are right for it to do so.

Call-on routes are allowed into the platforms at Southampton and at a couple of other locations. This is selected by the interlocking at routesetting time when the platform (or last track(s) in the route) track is occupied. Therefore, if a train is on its way to the platform, but hasn't yet entered it, do not overset a call-on route until the train is actually in the platform.

Point locking is effective on certain points which are located immediately beyond a signal. This means that the points cannot be moved until after a timeout after the berth track circuit to the signal has been occupied. The overlap has been timed to release at this time also, so when the overlap releases, so does the point locking and you will be able to (subject to other conditions, of course) move the points again. This protection is to avoid the possibility of an overrunning train rolling into the points which are being moved from normal to reverse or vice versa, thus derailing the train and damaging the pointwork.

There are a couple of alternative (non-preferred) routes. The interlocking will automatically select the alternative where the preferred route is unavailable.

The following is a schematic map of the area showing the signal numbers and freight-only lines. Signals are not necessarily shown on the correct side of the track; this is just for a rough guide to the signal numbering.

The first character (digit) indicates the classification of the train:

The second character (letter) indicates the routing or destination area:

B - Waterloo and Southampton Docks, Lymington Pier, or Poole

D - Salisbury and Eastleigh via Redbridge

Note that older/newer timetables may be slightly different.

Here are some tips to help you regulate trains through your area.

Watch the trains as they approach on the fringes. You will get to learn how close they are to signals, which is vital for regulating some of the junctions because of the long signal sections.

Before letting a freight train out of a yard, make sure there is a path for it. Some may try to leave early. You do have the advantage of lots of loops though.

And finally... Have fun! Experiment! Create your own timetables and spread them around to friends! Edit the supplied timetables freely, I place no restrictions on adapting them and spreading them around, except that they are to be used with SimSig only. If you create a great timetable, why not send it to me so I can upload it onto the SimSig website and allow others to download it?

This is an Adobe Acrobat PDF file. If you don't have Adobe Acrobat Reader installed on your computer you can get a free download of the latest version from the Adobe website . Use the built-in Find function (Ctrl+F) to locate signal numbers.