Welcome to SimSig Waterloo! Waterloo was the first non-IECC location to take advantage of the authentic SimSig simulation model and has now been updated to take advantage of the newer features of the SimSig Loader. All the usual SimSig features are included in this simulation which shows what Waterloo may look like if it was controlled by an IECC.

About the Waterloo Area

SimSig Waterloo covers all the lines from Waterloo Station (including the former International Terminal used by Eurostar) to Earlsfield on the Main lines and Putney on the Windsor lines. It also covers a slightly remodelled Clapham Yard where some trains are stabled away from the rush hours.

Waterloo is in reality controlled by a large power box in Wimbledon. The layout is rather complex and the level of train service is intense on what is eight parallel tracks. In reality, the whole layout is split down the middle, thus the lower numbered platforms and the four tracks to Wimbledon are on one panel and the high numbered platforms, the Eurostar platforms and the lines towards Putney are on another panel.

In SimSig, you have the opportunity to operate what is possibly the busiest railway corridor in the United Kingdom and you will be in control of the whole lot on your own (with a bit of help from the ARS). V4.2 includes the option to launch without ARS. 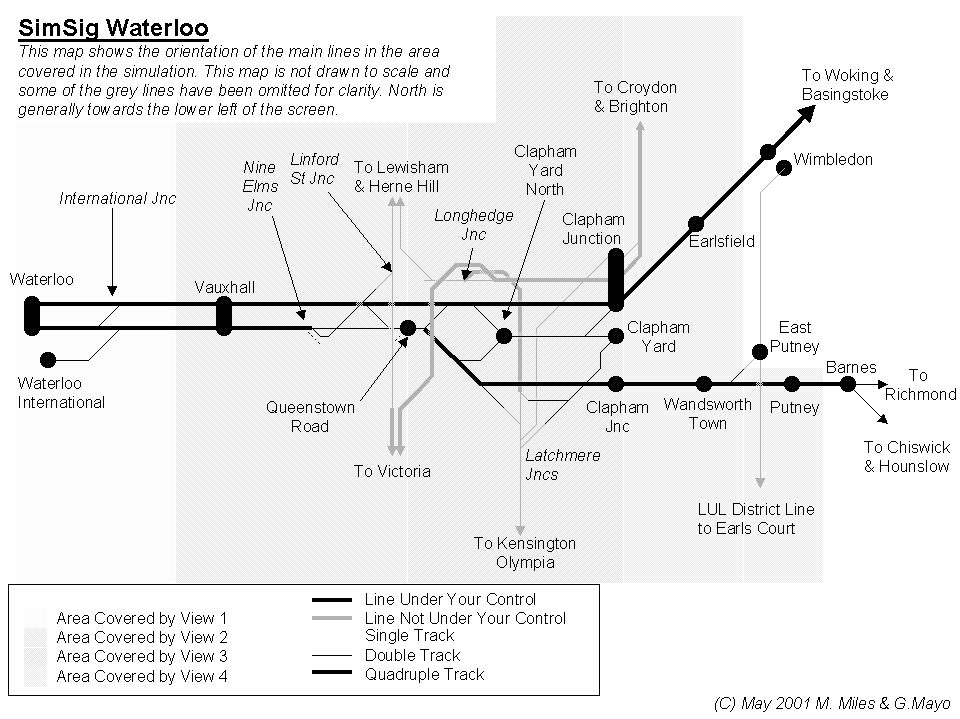 The Wimbledon fringe consists of four running lines. You get notification of approaching trains as they depart from Wimbledon Station. Just north of Wimbledon, the Up Slow Line passes over the top of the Fast Lines. Trains that call at Earlsfield will only enter your area on the Up Slow Line. Some other trains may enter on the alternate line to which they are booked to travel over. Entry can be blocked and trains diverted to the alternative lines by entering blocking codes in either berth W142/206 or W140/208 for scrolling/paged versions respectively (the first signals under your control).

The Barnes fringe also consists of four running lines. You get notification of approaching trains as they depart from Barnes Station. Some trains may enter on the alternate line to which they are booked to travel over. Entry can be blocked and trains diverted to the alternative lines by entering blocking codes in either berth W336/259 or W334/261 for scrolling/paged versions respectively (the first signals under your control).

Latchmere Junctions are not under your control, however you see the trains approaching from Kensington Olympia. Depending on the direction that the trains are required to be routed at Latchmere, they may either appear approaching West London Junction or Clapham Junction Station.

Two lines leave the Windsor Lines at Nine Elms Junction and head on a flyover to Linford Street Junction. This line was constructed to enable Eurostar Trains to gain access from Waterloo International towards Brixton, Orpington, Ashford and the Channel Tunnel.

In SimSig, the layout of Clapham Yard has been slightly simplified, but the general layout is more or less the same. There is one line that leads to the sidings of Clapham Yard.

There are 8 approaching Lines including the Windsor Reversible.

Platforms 1 to 5 are only able to hold 8 car multiple units.

Platforms 7 to 19 will hold at least 12 carriage units.

Each platform is long enough to hold a 20 car Eurostar train plus a locomotive, or two 8-car trains of any stock following the reopening of platform 20.

Only accessible from Platforms 1 to 7.

Only exists on Windsor Lines.

Platforms only on Up Windsor Fast and Down Windsor Lines, platform on Windsor Reversible Line is disused.

Ladder connecting all lines to South of Station.

A short curve to Latchmere Junctions giving access to Kensington Olympia and the former Eurostar Depot at North Pole Junction as well as access to the Midland and Western regions.

Trains reverse on lines ‘A’ and ‘B’ if required while entering or leaving Clapham Yard.

Line ‘A’ is also the carriage washer line.

Both of these lines are permissive, meaning more than one train can be signalled onto these roads at one time. Both roads will hold 2 8-car trains of 20m stock.

6 platforms on London to Brighton Lines are not shown as they are completely independent to the lines covered in this Simulation (in reality, these lines are not controlled by Wimbledon).

5 platforms on Wimbledon Lines (including Up Loop).

4 Through Platforms on Windsor Lines.

One dead end platform for terminating trains to and from Willesden Junction (High Level).

3 platforms (No platform on Up Main Fast Line).

A simplified layout to show trains leaving and approaching on the four main lines.

4 Platforms served by several fast services and all local trains.

A fringe location with a train describer style display much like Wimbledon.

These have been added to v4.2 and are 2 character TD berths which display the timetabled platform at Waterloo. This allows the signaller to better plan the routing without having to refer to planners etc. First display is for trains approaching Clapham Junction and again on the approach to Vauxhall where the display is then passed through a number of such berths up to the throat of Waterloo. The Vauxhall to Waterloo platform berths allow for queuing trains.

The Whole area is controlled by Multiple Aspect Signalling. The majority of the signals are four aspect signals, however, between Vauxhall and Waterloo all the signals are three aspect signals. There are some shunt signals provided on some of the departure lines out of Waterloo, but it is unlikely that these will be needed often.

All the dead-end platforms at Waterloo are ‘permissive’, which means that you can put more then one train into the section. The signals that protect the platform lines are provided with call-on subsidiary signals. See the section about call-on routes below.

Some signals have approach release controls for routes over the slower crossovers to ensure that the trains’ speeds are correctly regulated.

Call-on routes are allowed into the platforms at Waterloo. This is selected by the interlocking at routesetting time when the platform track is occupied. Therefore, if a train is on its way to the platform, but hasn't yet entered it, do not overset a call-on route until the train is actually in the platform.

The Windsor Reversible Line, which is the bottom line of the eight lines that pass through Vauxhall (on View 2), has special controls that hold the intermediate automatic signals between Nine Elms and International Junctions to danger. When a route is set onto this line, the automatic signals will clear in the directions which the route is set. This is provided of course that there isn’t something else which may prevent a signal from clearing such as a train.

Without going into great detail, the line speeds are approximately as follows:

There are a few things that may help with inputting timetables that need mentioning. They are summarised below.

When inputting trains into the editor, certain locations must be included to satisfy the editor’s requirements. These reflect the key timing points on the routes in the area simulated.

The ARS will automatically insert certain timing points for non-stop trains at certain locations. This is to aid ARS in pathing.

Trains to and from Wimbledon require the inputting of a time for Clapham Junction (Main Lines) as well as Waterloo.

Trains to and From Barnes will need timings added for Clapham Junction (Windsor Lines), West London Junction and Nine Elms Junction too.

Should a train need to cross from one line to another then the location where the crossing move is to happen also needs to be added.

Departure line at Waterloo needs to be input at Waterloo for down trains departing Waterloo Station.

Path and Line codes should automatically be carried through the timing points as far as they are applicable.

As far as line codes are concerned they are listed as follows:

As a general guide to what the trains really are, refer to the tables below. Of course, as timetables change periodically, the information in these lists may not be correct for all timetables in this area.

The first character (digit) indicates the classification of the train:

1 - Express passenger train, postal, or mail train as well as various other trains like locomotives setting out to rescue a failed train

2 - Ordinary passenger train, and a few other types

6 to 8 – freight trains of various speeds

9 – Eurostar Train (This number used to be used for freight trains which do not have a fully continuous brake, those inputting older timetables may wish to use Class 9 trains in this way)

The second character (letter) indicates the destination/origin area (the list below is a rough guide):

A – Trains to and from Farnham and Alton (Hants)

B – Trains to and from Southampton, Bournemouth and Poole

C – Trains to and from Reading

D – Trains to and from the Dorking and Guildford areas

F – Trains to and from Woking

G – Trains to and from Guildford

H – Trains to and from Shepperton

I – International services to and from Belgium

J – Trains to and from Hampton Court

L – Trains to and from Salisbury and Exeter (these are diesel trains), also trains bound for the Anglia Zone

N – Trains to and from Guildford Area

O – Trains that terminates in Southern Zone, which started in another zone. This letter is also used for international services to and from France

P – Trains to and from Portsmouth

R - Trains to and from Staines

S – Trains to and from Staines and trains heading towards Scotland

T – Trains to and from Portsmouth

U – Trains to and from Windsor

W – Trains to and from Weymouth

X – Special trains and out of standard loading gauge trains

On the continent the international trains use a number instead of a letter for the second character of the train. The O’s become zeros and the I’s become ones. These numbers are also the public timetable as the four number code derived from the train’s reporting number. Thus, for example, 9O35 becomes 9035 on the continent, in the same way that 9I35 becomes 9135.

These are Adobe Acrobat PDF files. If you don't have Adobe Acrobat Reader installed on your computer you can get a free download of the latest version from the Adobe website . When checked during September 2014, it had reached v11 and the download size was just under 50MB.

*Fringe box, signals not controlled in this simulation

Note: in this sim the "TIPLOC ID" is not the official TIPLOC

Notes in this Table

'Sub-car' is used as short for 'Suburban car', and is used here to represent the length of one class 455 carriage, approximately 20m.

'L-D car' is used as short for 'Long-Distance car', and is used here to represent the length of one class 159 carriage, approximately 23m.

Please note that generally only bug fixes have been completed alongside the update to Loader format and there are known prototypical differences remaining. It is not expected that these will be addressed given that this is a free simulation. Nevertheless the differences are trivial and unlikely to affect service.

Have fun! Experiment! Create your own timetables and spread them around to friends! Edit the supplied timetables freely, We place no restrictions on adapting them and spreading them around, except that they are to be used with SimSig only. If you create a great timetable, why not send it to us so that we can upload it onto the SimSig website and allow others to download it?