Reversing a train in SimSig is accomplished in two ways; via its timetable (TT) or by directly ordering its driver to reverse. Reversing via its TT happens automatically and is what takes place in nearly all cases; all you need do is set the correct routes. Reversing by direct order should be only be used as a last resort to extricate your train, e.g., if it has made its way to the wrong location.

1. Identify the correct reversing signal ahead of the train, i.e., the signal at which it will stop and reverse. This may be a signal at a platform or a signal located along a track. Whichever the case, the signal will be seen on the layout to be in an appropriate position to mark the beginning of the train's next route (naturally, in the opposite direction from which it approached the reversing signal). The signal map accompanying the manual will help you find the signal if its number is listed in the TT.

When the reversing signal is at a platform there is usually no need to specify in the TT that the train will need to reverse at a particular location as the sequence of locations in the TT should make this obvious. When the reversing signal is located somewhere along a track it is identified by a location description or a signal number and ideally (though not always) is accompanied by "REVERSE" or "REV", meaning "reverse at this location". Examples:

Note that if you see "RVL" in the TT, it will be in the Line column, not the Location column. RVL stands for Reversible, meaning that the line is used in both directions (bidirectional). It does not indicate that the train will reverse there.

Note that the reversing signal always faces in the opposite direction from those used by the train to approach it. If your train is heading Up line to the platform where it will reverse, look for a signal facing Down line. Often this will be a shunt signal, when there are points adjacent to it.

3. You will know you have routed the train correctly when it stops with its rear end exactly at the reversing signal. Additionally, it may be helpful to display the Train List (press F2) to confirm that the Direction of the train has changed (from Up to Down or vice versa), indicating reversal of direction has occurred automatically. The train may look no different on the layout (i.e., is still occupying the same track circuit, so appears the same to the signaller), but its direction of motion is reversed.

4. After the train reverses, you may need to Interpose a new headcode (see Train Activities > Next Working). All that remains is to set its next route, which of course will be in the direction opposite to its approach to the reversing signal. Note that if it joins with another train at the reversing location, attempting to set an exit route before joining is commenced will generate a call-on error. Note that after the route is set, the train (particularly if it is a slow goods train reversing across a shunt) may require many seconds to get moving again, so give it time! Also check the TT to see whether the train has been scheduled to spend extra time at the reversing location before departing.

If for some reason the train refuses to change direction automatically upon stopping at a reversing signal after a reasonable time has elapsed, do not order the driver to reverse without first re-checking your route. Nearly always the train will not reverse because it has not proceeded far enough, or proceeded to the wrong signal, etc. Examine both the Messages box and the Train List window for error messages. If the Train List window tells you your train is "Waiting at red signal xxx" it usually means you should clear the train to the next signal, or to a different line. Only order the driver to reverse as a last resort, and if you do so, be prepared for more error messages such as "Run out of valid track" as the train is still expecting to encounter a suitable reversing signal!

To do this, open the Train List (press F2), which can also act to simulate conversations between driver and signaller. Right-click on the train in question and select Signalling Options > Reverse Direction. Its Direction in the Train List will now have reversed, and if the line ahead of it is clear it will even begin to move in reverse. If the first signal ahead of it is a shunt signal, you may need to order a second command, Shunt Forward, to make it move. Control the train's direction and motion by setting appropriate routes.

As mentioned above, use this only as a last resort to extricate your train from a misplanned route, or if a particular timetable scenario calls for it. As far as possible, allow your train to reverse automatically by setting the correct routes for it. This simulates the real-life situation in which a driver would already know ahead of time which signals are used for reversing, and only require a route cleared by the signaller to one of these signals.

Goods train 6R02 enters the area from Baldock at 07:25 heading Down, to reverse on the Down line before moving back up to Sherriff's Siding. The TT entry reads "ROYSTON S K246 (REVERSE) (Arr.) 07:35 (Dep.) 07:38". This means 6R02 stops and changes direction at signal K246, waits three minutes, then reverses up into Sherriff's Siding.

We need to set a route past K246 far enough for this long train's end to stop at this signal. We can do this by setting the route K975-K977-K981. Note that no Up signals are included!

In the next picture we see 6R02 has stopped with its rear at K246. Its Train List entry shows its Direction has changed from Down to Up, also that it has stopped. Note that although its route has been set as far as K981, it still stopped short of entering Royston station*. Could we have gotten away with simply setting K975-K977? Unfortunately, no, since this route ends just short of K246. The next Down signal is K981, so the minimum route we can set to K246 is K975-K977-K981.

*All the signaller sees is the red stripe, indicating that the track circuit between K246 and K978 (Up signal on LH side of Royston 2) has been activated (de-energized), and the train is somewhere along that TC. Although the layout shows the RH end of the train to be "aligned" with the edge of the platform, in actual fact it probably stopped well short. Try this yourself with Show track circuit breaks enabled in Display Options.

Loco 0C080 exits Bath Road depot to stop at Bristol East Jn (Junction), reverse and enter Bristol Temple Meads MS1 (Middle Siding 1). All the TT entry states is "BRISTOL EAST JN (REVERSE)". Which signal in the Bristol East Jn area should we choose as the reversing signal? First, since the loco is heading out Up, we must look for a signal facing Down, which rules out 59, tempting though it might seem. Amongst all the signals on lines passing through Bristol East Jn we can identify 5 possible reverse signals: 28, 26, 24, 22, 20. Of these, 24 is the most suitable as it is on a line leading back to MS1. 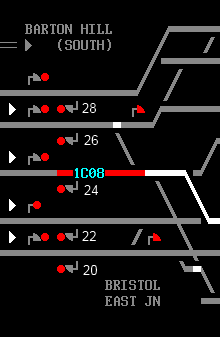 However, to clear a route past this signal so that 0C080 can stop there, we need to set the route all the way out from 59 to 65 on the Main Down line! (It's not really as far as it looks.)