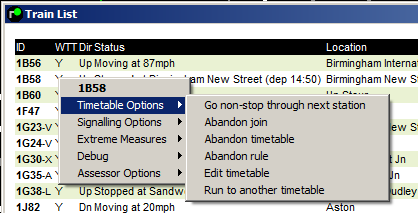 Go non-stop through next station

Instructs the driver to drive through the next scheduled station stop without stopping. Can be used to catch a late train up if you're willing to risk unhappy passengers.

Instructs the driver of a train that is waiting for a joining train to abandon the operation and proceed. This is used when a joining train is late and you want to send out the shorter service rather than wait for it.

Instructs the driver to abandon the current timetable and just keep driving according to signals and points. The driver will not stop or object to the routes you set. Be careful that he will also drive right off the edge of the sim if you signal him to!

Used to override a timetable rule if the train is being delayed because of it. Note that some rules (generally in older TTs) are used to simulate trains being loaded or unloaded with parcels, newspapers etc, so abandoning the rule may not be realistic.

Allows you to edit the timetable the driver is running to. The editor works the same way as the main timetable editor found in F4 Timetable . You might use this to divert the train via a different line in the event of a failure. Note that a handful of characteristics (acceleration, length and power) cannot be changed in this manner.

Run to another timetable

Instructs the driver to run to a different timetable. You need to enter the TD of the timetable you want him to run to and tell him which location on that timetable to start from.

Run to a new WTT

This page was created on the old website by Peter_Bennet