Lever Frames are mechanical signalling devices consisting of a row of manually operated interlocking levers which control points. A manually operated signal box contains a row of them. However, they are also found outdoors, adjacent to sidings or emergency crossovers to which they control entry, when they are termed Ground Frames (GF). They are released on request to the main signal box so that the points and signals can be operated, and after activities are completed the levers are restored and the frame re-locked to the normal setting.

Typically there is a 'release' or 'king' lever which is (electrically) released by the main box, which allows it to be pulled to the reverse position to allow operation of the signals and points as required. After the required operations are completed, and the point and signal levers have been replaced to the normal position, the king lever is then placed in its normal position, and the frame is relocked by the main box.

Previous simulations included the release arrangements and route setting by clicking directly on the appropriate signals.

In the latest simulations (March 2010 onwards) the display and operation of the actual levers has been included. A new window can be opened, which displays a representation of the lever frame, from which the levers are moved to enable the required activity. More than one frame can be opened at a time.

This module is still being developed and there may be changes over time including telephone calls and better graphics.

In multiplayer, lever operation is only available to the server/host, although clients can still give and cancel releases.

Click on Show then Lever Frames and select the relevant lever frame to display. Alternatively, right-click on the 'N' button of the relevant ground frame. 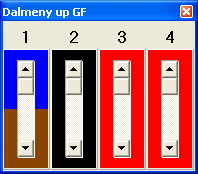 The levers are coloured by function, as in a normal lever frame:

Hovering your cursor over the lever will pop-up a description describing what the lever does.

The lever frame window is closed by clicking on the 'X' in the title bar.

- Move King/Release lever (lever 1 in this case) down into the reverse position to unlock the other levers;

- Move the points lever (in this case lever 2) down into the reverse position, to switch the points (their position will be visible in the main window);

- Move the appropriate signal lever (levers 3 or 4 in this case) to clear the required signal for the movement (can be seen in main view);

After the move is completed and the train is clear of the points, replace the levers in the reverse order:

- Restore point levers to replace the points to the normal position;

- Restore the release lever to normal, to relock the other levers;

- Once all the levers are correctly restored, the lever frame is relocked on the main signalbox panel by right-clicking on the F(ree) button, whereupon the N(ormal) indicator lights.

- The exact interlocking may vary from frame to frame and the simulation instructions should be referred to for exact instructions.

- Some points are provided with facing point locks (FPLs), the control lever for which is blue. This lever must be moved (unlocking the points) before the lever for the points themselves can be moved. The FPL ensures that the points are either normal or reverse, and not halfway between the two.

- Depending on the lever interlocking it maybe possible to clear both (opposing) signals at the same time. This is because any moves are carried out under local control, by shunt signals and the driver will be proceeding "on sight".

- Some lever frames may have more or less than 4 levers.

- Some lever frames have more than one release, each release allowing certain activities to take place without blocking normal signalling on adjacent lines.

- Many lever frames do not control actual signals on the ground. Drivers of trains are given verbal and/or visual authorisation to proceed by the lever frame operator. In SimSig this authorisation is shown by the use of fictional shunt signals (these will be hidden when the frame has not been released). There is usually no interlocking in this situation, but you should ensure the points are lying in the correct positions before giving a driver authority to proceed.