No events to display
We are not planning any more in-person events until the COVID-19 situation has improved. 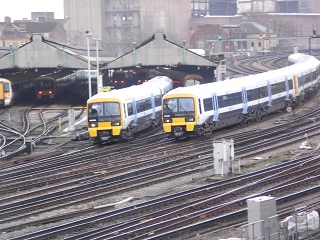 Home of the luxury charter train, and route of the Eurostar - the latter at least until 2007 - Victoria South Eastern covers the lower numbered platforms at Victoria station in London and extends deep into the Kent countryside, south-east of London. A fair amount of freight in this simulation goes on top of the normal passenger service.

This simulation has a new feature to match reality: between Shepherds Lane Junction in south London and Shortlands Junction in greater London non-stop trains have the ability to dynamically re-route without questioning the route. This allows for some congestion minimisation control if things become a little busy on the scheduled route as the majority of drivers are qualified on both routes.

Six signallers operate these panels off-peak with an additional signaller during rush-hour on panel 10, splitting that panel into panels 10A and 10B. ARS is provided in SimSig, allowing you to run this simulation alone, but you will still need to keep an eye on things and handle the moves that ARS can't handle such as telephone calls from the sidings.

A typical weekday timetable can have upwards of 1,200 services - but don't let the lower number than Victoria Central fool you, for many of these trains are on the simulation for a lot longer in duration.

As usual, the high SimSig standards mean that we have done our best to recreate the signalbox as faithfully as possible - poring through hundreds of control tables, gradient charts, platform working books, and signalbox special instructions, as well as interrogating numerous signalbox staff. We hope you enjoy it!

Download by clicking "Check for Updates" in the Loader