Bookings can be made through the Events section. 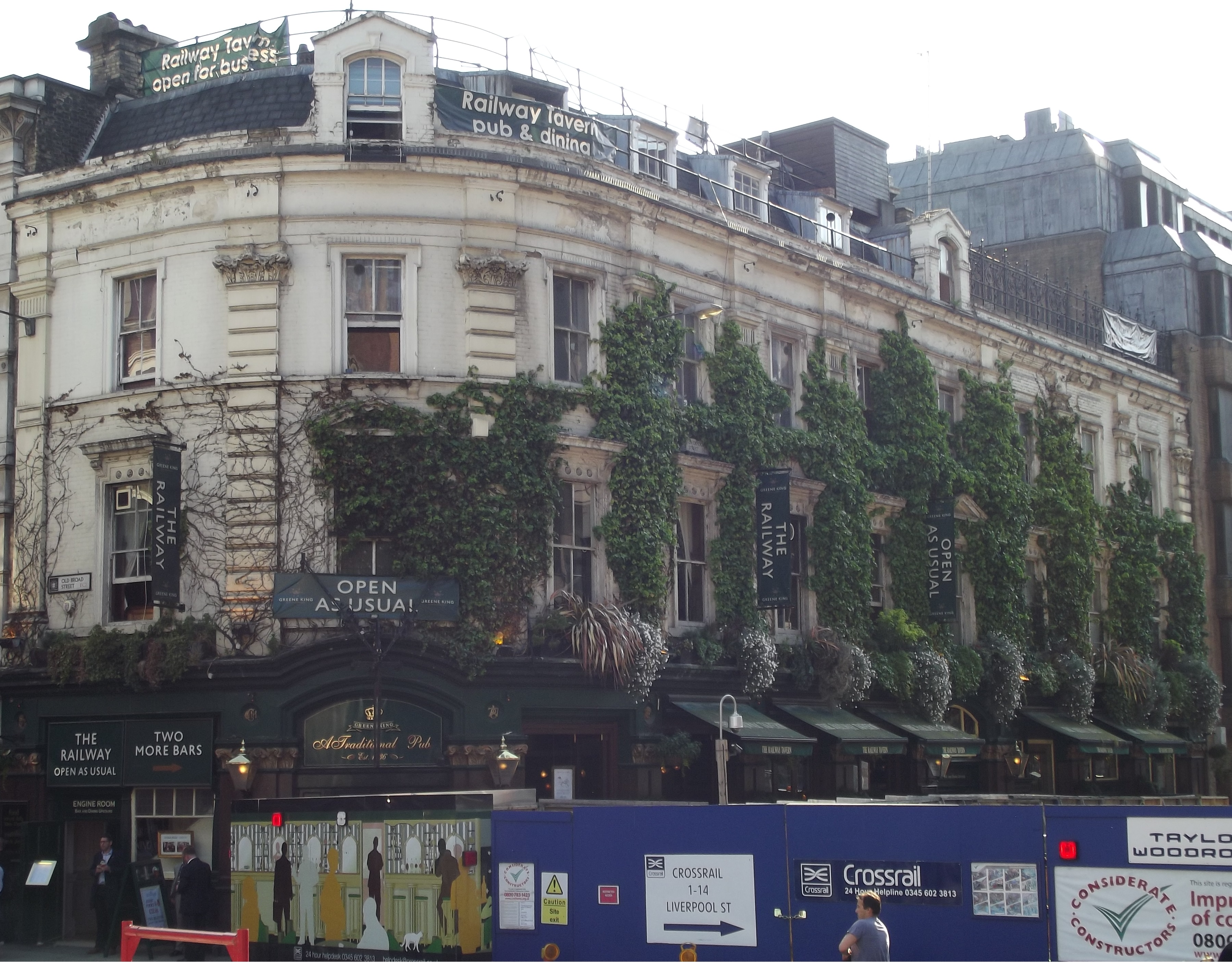 London Liverpool Street station is served by Greater Anglia from Cambridge, Norwich, Ipswich, Clacton and many other stations on the Greater Anglia network.

Upon arrival at London Euston, you could take the short walk (about 5 minutes) to Euston Square station to use either the Circle Line or Metropolitan Line all the way to Liverpool Street, or the Hammersmith & City Line to Moorgate and take a short walk via Finsbury Circus to the pub. Alternatively, you can take the Victoria Line to Oxford Circus then change onto the Central Line to reach Liverpool Street.

Upon arrival at London Paddington, you could take the Circle Line to Liverpool Street (either via Edgware Road (changing trains there where necessary), which takes about 23 minutes; or direct via Victoria, which takes about 38 minutes) or the Hammersmith & City Line to Moorgate then walk to the pub via Finsbury Circus. An alternative is to take the southbound Bakerloo Line to Oxford Circus then change onto the eastbound Central Line to Liverpool Street - this is slightly quicker, but does involve changing lines.

For the above-ground option, the 205 bus run very regularly (at least every 12 minutes) from outside or near to all of the above stations directly to Liverpool Street station.

Advance tickets are available for the meet date through most TOCs.

If anyone would like advice on split ticketing or alternative routing for their journey, please feel free to PM 'headshot119' on the forum.

Direct bus routes from most other London Termini and key stations are available.

For routes with a yellow background on the bus stop flag, you need to buy your ticket before boarding using the red machine located by the stop. Any routes with a blue background are night buses.

National Express coaches and Megabus provide coach services across the country into London. If searching for a fare, don't forget to check stops in London other than Victoria Coach Station, as some actually stop beside the street at a few locations.

A limited amount of parking is available in bays in the nearby street, Finsbury Circus. You would be strongly advised to give yourself plenty of time if you are travelling via car. There is no congestion charge at weekends - it ends at 18:00 on Friday and restarts at 07:00 Monday.

A buffet lunch will be provided. Those with special dietary or allergy requirements can usually be catered for - the event sign-up form includes space to specify anything along these lines. There will be vegetarian food as well as meat/fish products.

Planned from 12noon to 6pm, those with laptops for use by the SimSig public are asked to arrive by 11:30 and register. Those without laptops are normally asked to wait until noon when it is hoped everything will be ready.

As with past meets, this covers the buffet and administration fees. Payment is usually required in advance for meets as we order food for a specific number of people. When more people turn up on the day without paying in advance, it reduces the food selection for those who were considerate enough to pay in advance. We realise that some people may not be able to confirm until closer to the meet date, but hope you understand the situation.

For those who do not like using PayPal, you will be able to make payment by cheque or bank transfer. Please contact Postal via PM through the Forum if you wish to pay offline.

For those arriving after a certain (yet to be decided) time, it is possible that there will be no entrance fee, but this again depends on many factors which are yet to be decided. If you have not paid in advance then entry will not be permitted until that time. It is unfortunate that the good natured majority has often been spoilt by a small few who try to eat without paying, hence our stance on this subject.

An informal meet-up may be planned on the Friday night for drinks and perhaps a meal too, but as said this doesn't always happen. More details closer to the time, once location and venue has been decided upon. Indicate on booking form if you are interested so we can update you nearer the time.

Brick Lane received its usual post-SimSig meet invasion (as far as the limited number that attended can cause an invasion).

There are some shots from the meet posted here on the Forum.

The meet was slightly down beat due to the limited number who attended (20 who booked and 2 who showed up later in the day). However the meeting was still enjoyed by both those sitting at workstations and those just there to socialise. The Victoria sims received a good workout with about 5 hours of sim time achieved. We had a good run because of the work of Andy Brown and James Nelhams in getting things set up promptly after we arrived.

The limited number attending also meant that the minimum spend required by the Railway in lieu of a room hire charge looked a distant target for much of the day. However, the sterling work of those who saw the target as a challenge enabled us to creep over the line just before the end of the meet.

There is a Forum topic about the meet (including a couple of pics of the Rogues Gallery shot while signalling was in full swing) here . Photos (by bill_gensheet) added below: 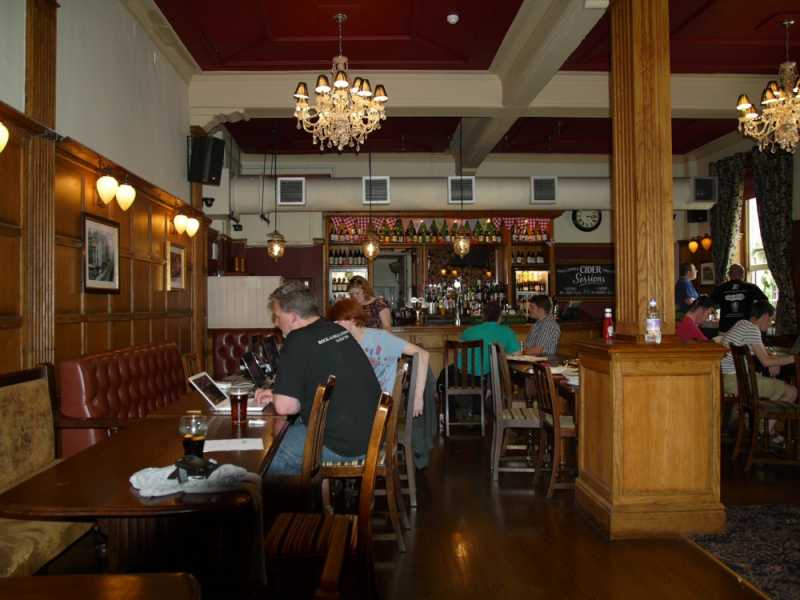 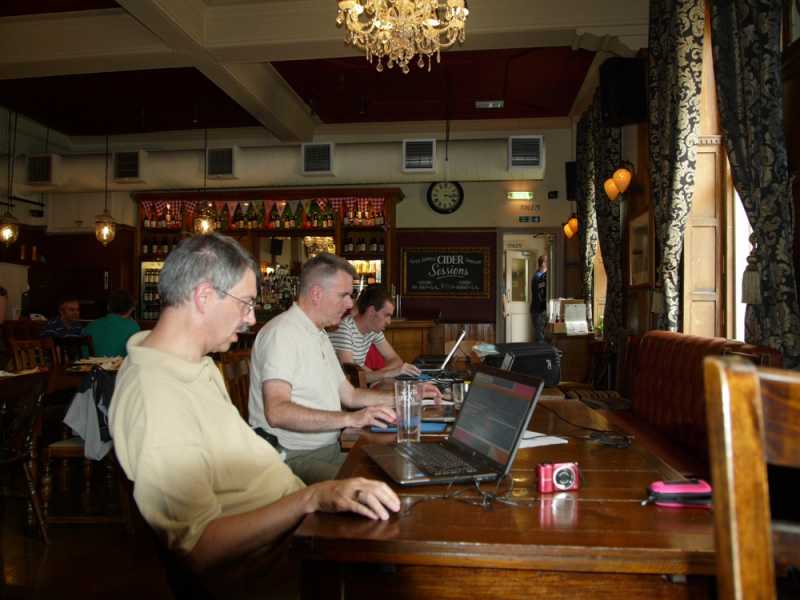