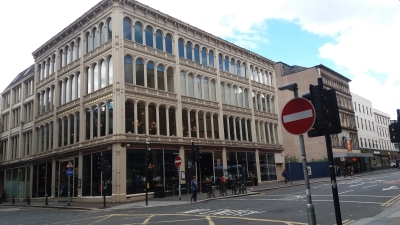 The venue is 200 yards from Glasgow Central station. From the main Glasgow Central High Level platforms, leave the station by the Union Street entrance (adjacent to The Beer House on the concourse) and turn right towards the River Clyde. Continue down Union Street, cross Argyle Street into Jamaica Street and the Crystal Palace is on your right. From the Low Level platforms (P16/17) leave by the Argyle Street exits, walk through the long tunnel under the station then right at the traffic lights onto Jamaica Street. There is also lift and escalator access to the Argyle Street exit from the barrier line at the end of Platforms 11 to 15 of the High Level station. A plan of the station can be found here

A map if the venue and surrounding area is here .

Glasgow is served by Virgin West Coast from Scotland, the Midlands, and London, Cross-Country Trains from all parts of England, TPE from Scotland and Manchester, and Scotrail from across Scotland.

National Express coaches operate services between Glasgow and many part of the country,

The venue is a Wetherspoons house. The pub is set out on two floors. At the rear of the ground floor is an area which is relatively secluded and is accessed through two passageways/entrances so that there is a measure of privacy. We have this area for SimSig use during the meet.

No entrance fee will be charged

As a major city with international trade, Glasgow offers a wide range of accommodation from B&B to 5*. Both Travelodge and Premier Inn have several hotels in and around the area.

Please offer other recommendations if you know of further suitable accommodation.

Please offer recommendations. Previous meets have included for example a meal at a Mexican restaurant followed by drinks at one or more local pubs. That is not included in the entrance fee for the meet!

The meet is often followed by dinner in an Indian restaurant which usually starts fairly soon after the close of the meet at 18:00. Suggestions for a suitable venue would be welcomed.

There is no visit arranged to date.

The venue had allocated a small number of tables in The Alcove at the rear of the main bar. We gradually managed to colonise further tables until we had room to spread ourselves adequately. Quite what the customers sitting at the other two or three tables thought with a row of us sitting and staring at computer screens and another group of us using the Wetherspoon's app to order large trayfuls of beer without having to walk as far as the bar would probably require an new page for the Wiki but that is a different story. To be honest, going to the bar was not the usual Wetherspoon's experience. The customers took it on themselves to form an orderly queue to get served in turn rather than the usual scrum of people along the length of the bar all fighting to attract the attention of a member of the bar staff.

We had getting on for 15 people in attendance (including one unannounced guest who had been box supervisor at Cathcart for part of his working life so he had a nice surprise). Peter Bennet was also pleased to learn that the sim was passed as fit for purpose by our guest. Another guest was Mattyq all the way from Australia. He was obviously still acclimatising to being in the Northern hemisphere as he started with his badge aligned to Southern hemisphere topology by being upside down to our eyes.

There were 6 laptops involved in game play with Port Talbot, Hereford and Cathcart all running. Cathcart will be released very soon while Port Talbot and Hereford are in the final stages of development. Everything was up and running for 12:00 and we kept going until 17:00. All those who wanted had the chance to work the various panels; those who didn't want took the opportunity for a social catch-up while enjoying some refreshment.

At the end of the meet, Karl took a roll-call of those who were staying on for a curry while those not wishing to stay made their way off having enjoyed a good afternoon of SimSigging and socialising.

We all want to say a big thank you to Karl and Peter for rolling out the previously unseen sims for us to try and also John Mills (Meld) for the TTs and Alan Gilchrist for the technical infrastructure and WiFi network.