The Leamington Spa and Fenny Compton simulation contains the line between Warwick (exclusive) and Banbury (exclusive) including the branch lines to Coventry and Kineton MOD, with two eras from 2003 and 2006.

The simulation covers approximately twenty-one miles of the Great Western Railway route from Didcot to Chester (DCL), with four miles of the branch line to Coventry, and the three and a half mile branch line from Fenny Compton to the Ministry of Defence site at Kineton. In the 2003 era, this distance is slightly less as Fenny Compton Signal Box fringed with Banbury North Signal Box at Cropredy, where an emergency ground frame was provided, released from Banbury North.

The main line is double track throughout, with middle roads at Leamington Spa Station, and goods loops in both directions at Fenny Compton, the down being bi-directional. The northern fringe is to Saltley Power Signal Box and the southern fringe to Banbury North Signal Box. In 2006 era, this line is Track Circuit Block throughout. In 2003 era it is TCB between Warwick and Fenny Compton, and then Absolute Block the rest of the way to Banbury.

The Coventry Branch is double track from Leamington Spa for the first three quarters of a mile until Milverton Junction, where it becomes single as far as the fringe with Coventry Power Signal Box at Kenilworth South Junction. In both eras, it is Track Circuit Block, with slots provided in either direction.

Within the simulation are two different workstations:

There are scenarios to shut either the Through roads at Leamington Spa Station, or the Up Goods Loop at Fenny Compton.

The 2006 era depicts the line in the original Westcad workstation, before the resignalling of the fringes to Coventry and Hatton, with transfer of those areas passing to the West Midlands Signalling Centre at Saltley.

The 2003 era depicts the line in the last full year of operation of Fenny Compton mechanical signal box, and the original NX-panel in Leamington PSB.

Train Operated Route Release (TORR) can be switched off in the 2003 era, this is only applicable to Fenny Compton Workstation.

Perfect: No delays and no failures - perfect for the new player.

Beginner: Normal running, no lines or platforms closed. No trackside failures but limited delays and disturbances.

Leamington Spa Station is a four-platform station, two of which are North facing bays. In between the two through platforms are middle roads which are used for passing freight trains and occasional regulation. The through platforms are signalled for permissive working, which is only authorised for contingencies which require the permission of Operations Control.

From Down Bay Platform 1 you can depart towards either Hatton or Coventry, but you cannot arrive into this platform in the Up direction, trains using it have to shunt. This bay platform is authorised for full permissive working.

From Up Bay Platform 4 you can only depart towards Hatton, but can arrive from either Hatton or Coventry. This bay platform is authorised for full permissive working.

The Field Sidings are in reality out of use, but are included in the simulation as they are still present within the interlockings, and at the dates of the simulated eras all of the infrastructure was also still present.

To grant the slot to Coventry PSB for trains in the up direction, you will need to set a route from the greyed out signal LN56 to signal LN54. This will lock points 236 at Milverton Junction normal.

This is the original area of control of Leamington Power Signal Box dating from 1985 when it was commissioned as the first conventional application of Solid State Interlocking.

This is the layout as installed by the Cherwell Valley Resignalling Project in May 2004, which saw the closure of Fenny Compton Signal Box, the shortening of control area of Banbury North Signal Box from Cropredy back to the outskirts of Banbury itself, and the replacement of the original panel in Leamington Power Signal Box for a WestCad workstation controlling three Solid State Interlockings (since replaced with the first WestLock to be installed in the United Kingdom).

The fringes to all other signal boxes are worked by Track Circuit Block.

For details of operation of the Kineton Branch Line, see the Fenny Compton section below.

Fenny Compton Signal Box is replicated here as it was just prior to closure in May 2004. It works Track Circuit Block to Leamington Power Signal Box, Absolute Block to Banbury North Signal Box and Token to Kineton.

There are up and down goods loops, the down loop being bi-directional in the 2006 era.

There are three sidings off the Down Goods Loop. In 2003 these were all through sidings, in 2006 Siding 3 had become a dead-end due to the Kineton end of it slipping down the bank. The branch line to Kineton MOD starts at the end of these sidings.

Trains bound for Kineton should be routed into any through siding at Fenny Compton, Once the train is at a stand, you should release the staff by clicking on the "Release Staff" roundel. Once the indication shows "Staff Out", you can authorise the Driver to pass the stop board (2006 era) or clear FC9 (2003 era). Note that the ability to authorise past the stop board (which is the driver phoning in as at any normal red signal) or the ability to clear FC9 are NOT interlocked with the staff (as in reality), so if you attempt to do either without the staff being released, the train will proceed to Kineton without it. Once the train arrives at Kineton, the Person in Charge will phone up to advise you that the train has arrived complete, and the NSKT system will indicate "Staff at Kineton".

For trains from Kineton:

The "F" roundel is white when the points can be moved, and red when they cannot be moved.

To clear the Down Home signal FC46, you either need all the track circuits clear upto and including the overlap for FC103, or the berth track circuit to FC46 occupied. This is the prototypical control that existed to enforce "board-to-board" signalling.

In the 2006 era, there is double red protection for Fenny Compton in the down direction. If OL3165 is at red, OL3163 will approach release from red, so beware if you replace the signals to danger with a train approaching. Any train past OL3157 will receive a change of aspect.

There are five usertrack:ssterms:lcs#other_crossings_(tel,_uwc,_mwl,_tmo_&_aocl)user worked crossings in this simulation, all between Fenny Compton and Banbury as follows:

To my team of testers, and timetable writers, thank you for the effort you have put in over the last year to get this sim to where it is today.

Finally to Geoff Mayo, and the others too numerous to name that have brought SimSig this far - Thank You! 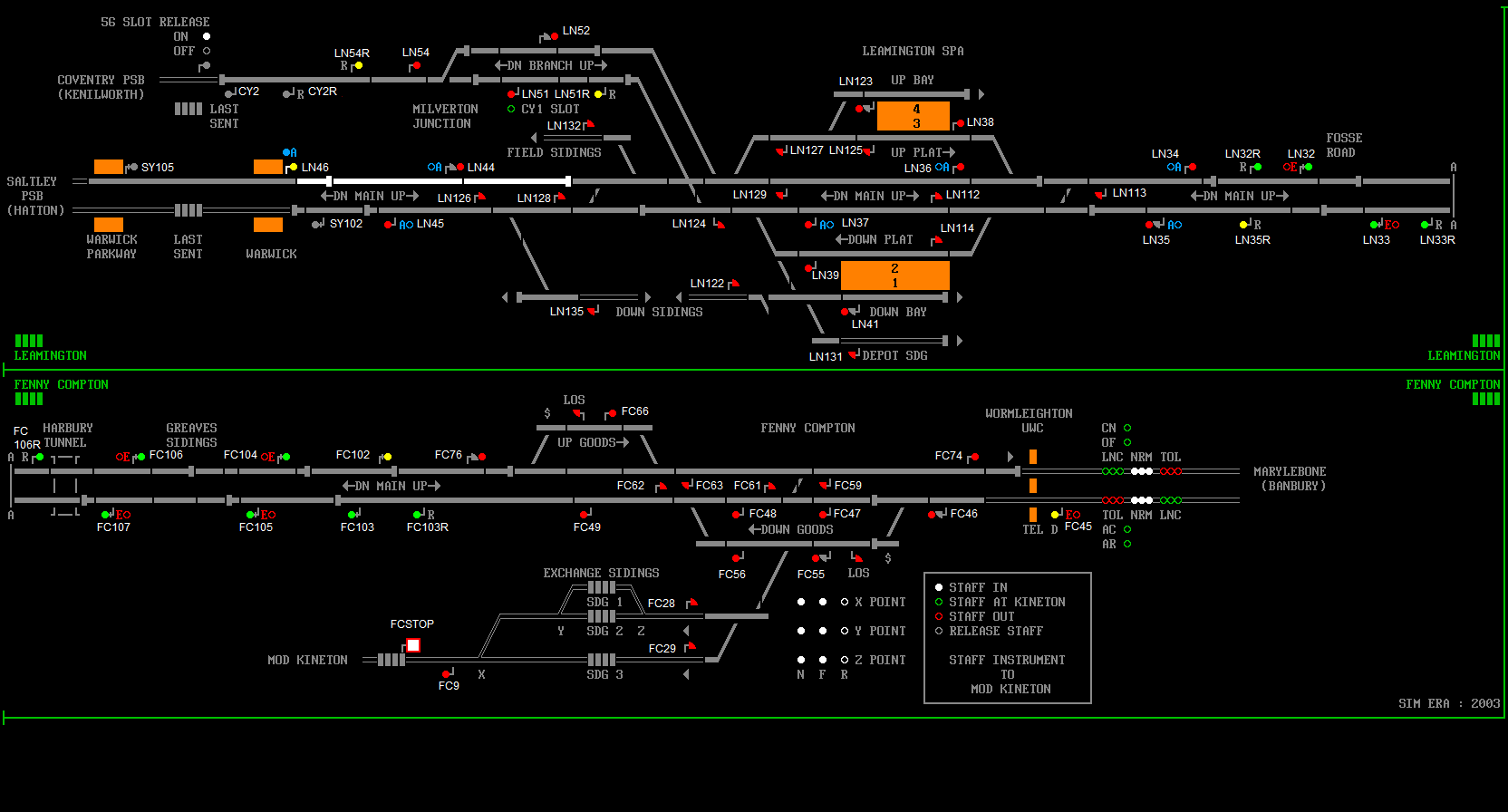 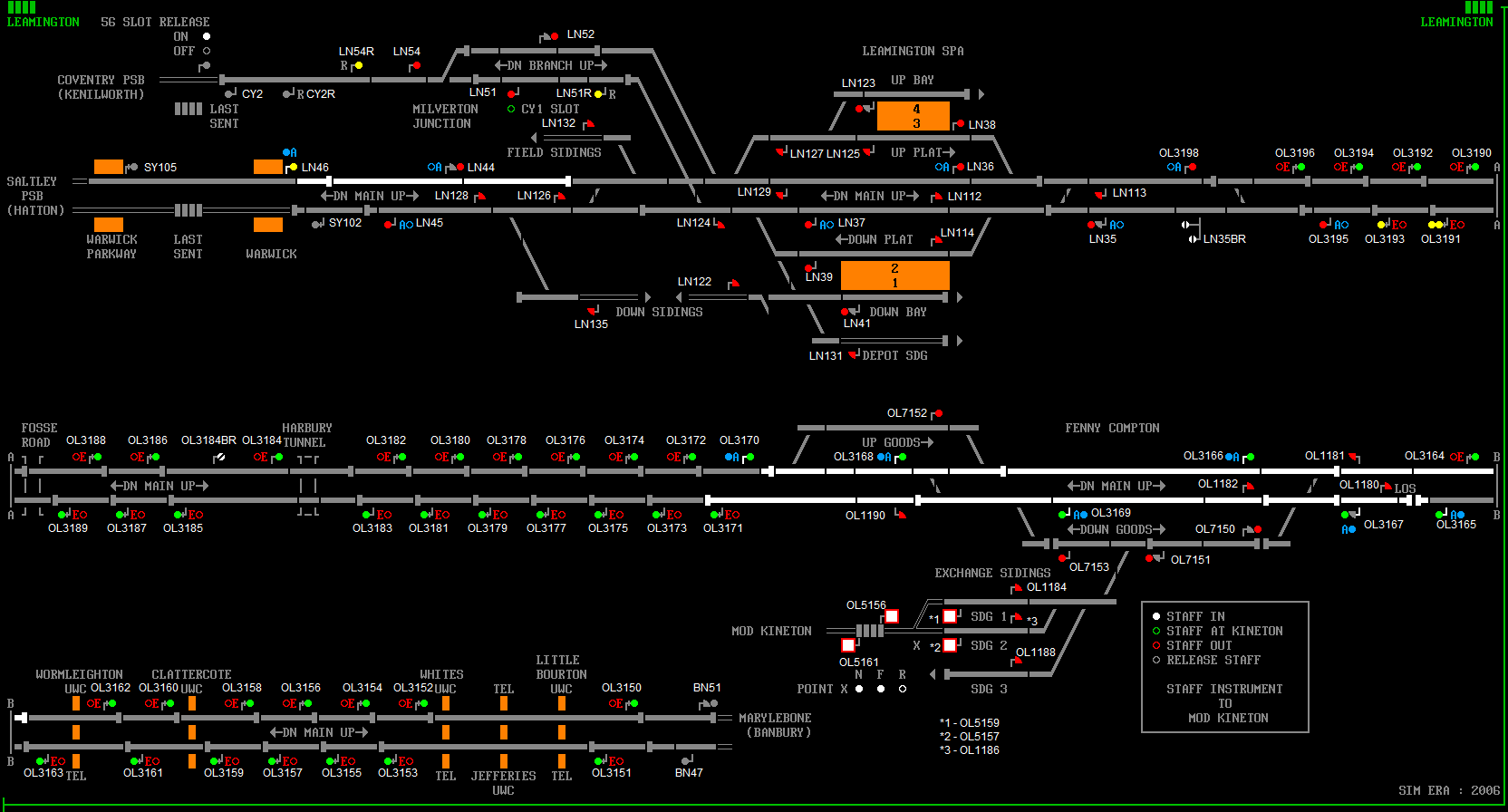 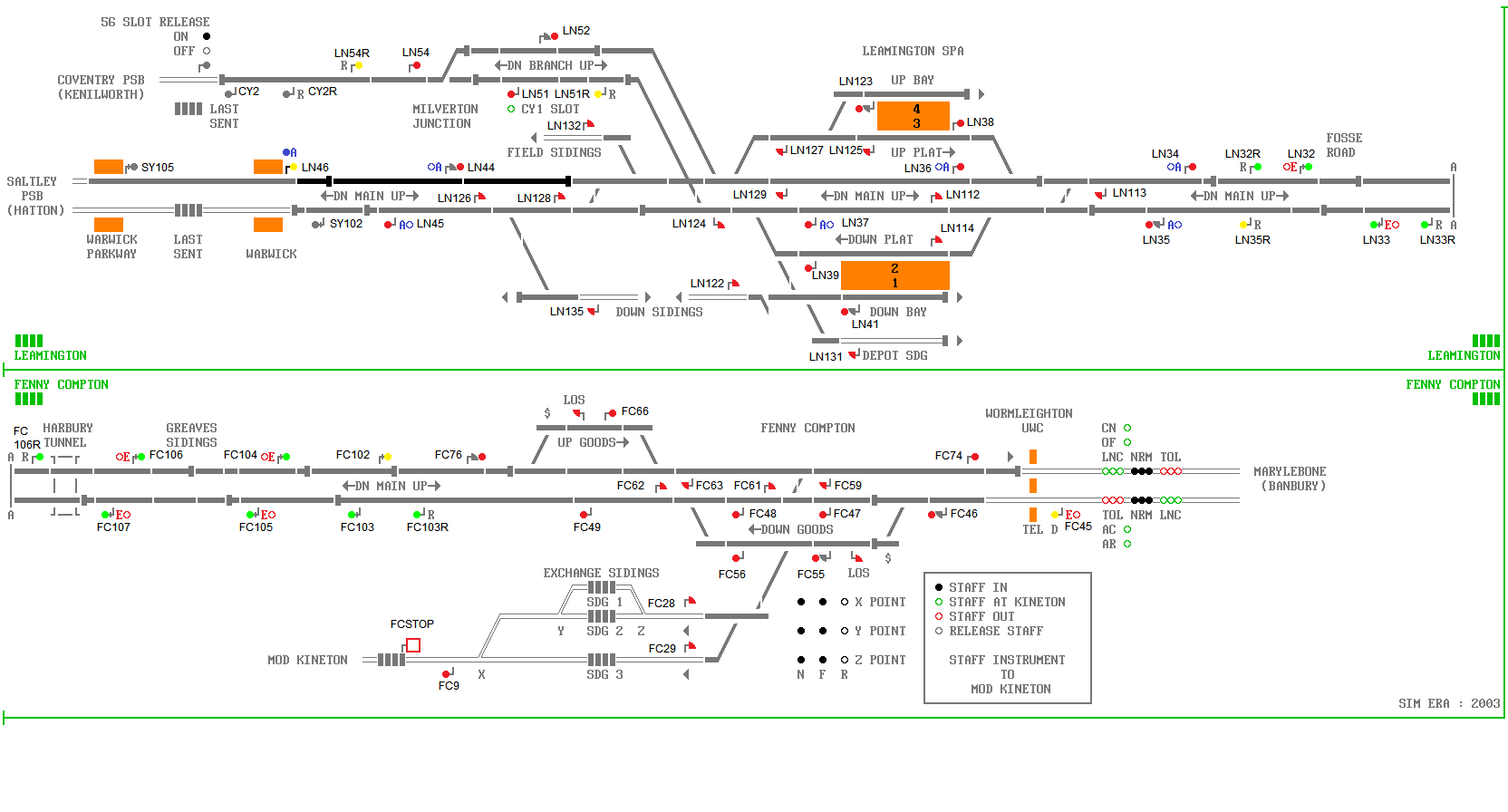 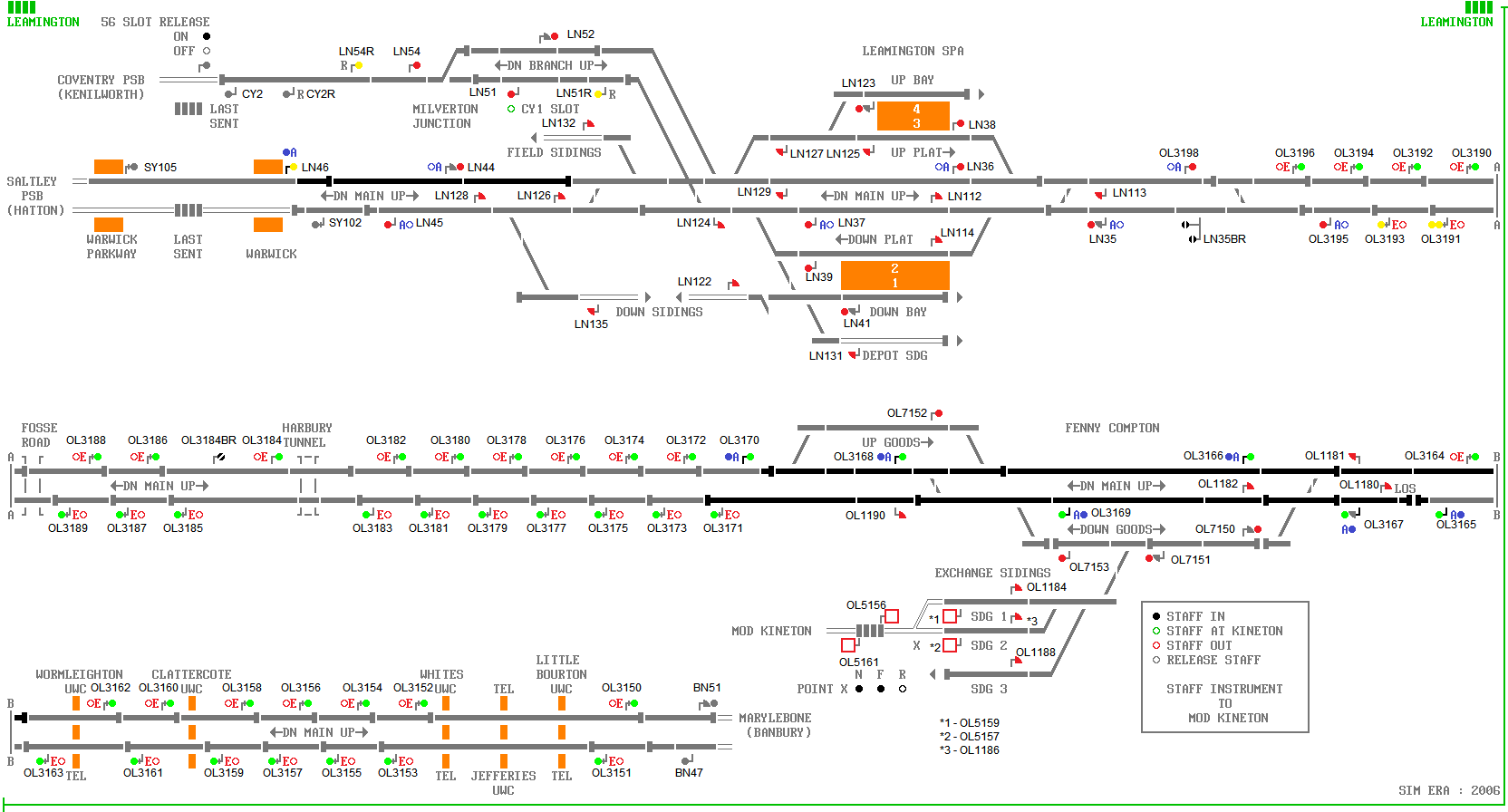