Introduction to Level Crossings in SimSig

Many simulations feature level crossings of various types. Some of these you need do nothing; others you need to give the crossing keeper time to get the barriers down; others you must lower the barriers yourself.

Individual crossing peculiarities will be described in the notes for that sim.

These are of two types - MCB and CCTV. MCB crossings are adjacent to a signal box, and are supervised directly; whereas CCTV crossings, as the name suggests, are monitored remotely. In SimSig, they behave in exactly the same way.

These crossings will have a set of buttons associated with them. In order to allow the signals to clear over the crossing, the crossing barriers first have to be lowered by left-clicking on the Lower button.

Next, when the barriers have lowered, you need to confirm that the crossing is clear. In real life this would be done by the signaller looking out the window (if a local crossing) or at his CCTV monitor (if remote). If all is well, click on the Clear button. If the crossing is blocked, the simulation will tell you this, via a message appearing on the Messages window telling you it is blocked when you click on Clear. Should this occur, you will first need to cancel any route(s) over the crossing, then raise the barriers to release the trapped vehicle by clicking on Raise. You may then start the lowering sequence again.

Some crossings have an auto-raise function - if present, there will be an Auto button at the crossing. When enabled (solid white), this causes the barriers to raise automatically after the passage of a train. It does not lower the barriers automatically! All of these buttons can be collared . Button labels are often abbreviated to RAI/LWR/FAI/AUT.

Note that in almost all simulations there are penalties for leaving the barriers down too long without a train. Whilst in real life signallers could effectively keep the barriers down all day if they so wanted to, they’re not really going to as they wouldn't be popular with neither the locals nor any other road users. So, SimSig has a penalty system in place to prevent you being lazy and keeping the barriers down - these penalties change depending on how long it takes for a train to pass. For example, if you lower the barriers and no train passes within 10 minutes, you will get a penalty; however if a train does pass you won't be penalised. You will also get a penalty if the barriers are down for a long time (perhaps, in this example, 15 minutes) even if trains do pass one after another - the cars need to move as well! The times that barriers can be down for varies - see the individual simulation manual for details. 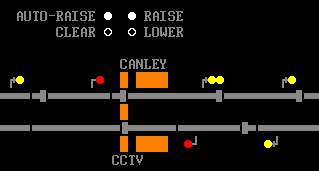 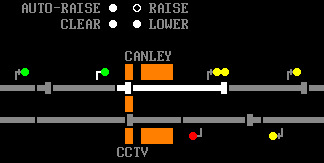 As the name implies, these crossings work automatically, and have barriers that only block half of the road. Normally these aren't linked into the signalling unless the signal is close to the barriers. You do not need to do anything to make these barriers work as they operate on the approach and passage of trains. For signals which are close to the barriers, if the signal would otherwise clear with the train standing at, or approaching, the signal then it will be held at red until the barrier lowering sequence has commenced. 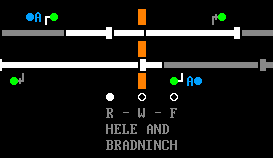 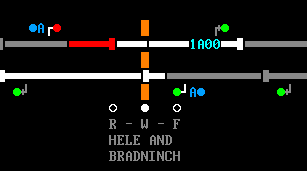 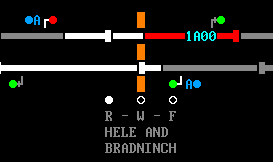 Because road users are only given (approximately) 30 seconds notice of an approaching train, drivers of heavy/slow vehicles (or farmers with animals) will telephone you to request permission to cross. See 'Other Crossings' below for details of how to deal with these.

User Worked Crossings (normally marked as UWC or TEL (telephone) on the screen) and red/green light (Miniature Warning Light (MWL), or Miniature Signal Light (MSL)) crossings again do not need user intervention. However, you may get a phone call from one of these crossings requesting permission to cross. If it is safe to do so, replace the protecting signals to danger, and put a reminder device on them. Then give permission. Otherwise, tell the crossing user to wait and they will phone back after the specified time interval. When the user has finished with the crossing, they will phone again. Remove the reminder devices and clear the signals.

Other types of crossing include AOCL (Automatic Open Crossing Locally Monitored). These types of crossing are activated automatically when a train approaches, and a flashing white light is displayed to the driver to confirm that the red road lights are working correctly (this is not displayed in the signalbox). If the road lights are not behaving correctly, a red flashing light is displayed to the driver, who will stop the train and investigate. In SimSig, these crossings behave in the same way as User Worked Crossings.

TMO (Train Man Operated) crossings are operated locally by drivers, who stop to lower the barriers and ensure the crossing is clear themselves before proceeding. They do not require any intervention by the signaller.

In the latter case, conventions vary between sims so check the manual, but usually, you may set a route across the crossing at any time. The (simulated) crossing operator will be able to see when a train is approaching and lower the barriers at the appropriate time, at which point the signal will clear with no action on the signaller's part. Often there is an indicator of some sort to show the signaller the status of the crossing, but no interaction with this indicator is possible. You should usually set the route in good time, otherwise the crossing keeper might not be made aware of the approaching train, and it will be delayed as the barriers are lowered. In some sims, you should be careful not to set routes in both directions too early, else when the train in one direction causes the barriers to be lowered, the barriers will be kept lowered until the train in the other direction passes too. 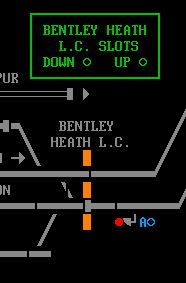 In the Saltley simulation, the crossing keeper at Bentley Heath controls the crossing and releases a slot that allows the signals on either side of the crossing to clear.