"Australian" signalling is actually a misnomer. There's no such thing. With vast distances separating the colonies that would become Australias major cities, no forethought was afforded by the pioneers of Australian railways towards the concept of an integrated national rail system. As a result, Australia, to this day, suffers a disparity between the various state-based railway systems, each one having its own track gauge, operating practices and signalling systems. The only step towards parity that has occurred is the linking of each mainland state capital with a track of common gauge, that being the 4' 8½" "Standard" gauge. The website of the Australian Government has an interesting artice about the history of Australian railways for anyone who wants to delve deeper.

This page will not detail the history of each states' respective signalling system. There are a plethora of pre-existing web pages that cover that topic. The intent of this page is to benefit SimSig players by giving an overview of each states' signal aspects and, where possible, compare them to UK aspects. How the signals will look on SimSig may also be shown.

Disclaimer: This page is a work in progress. The appearance of the explanation of a state signalling system is no guarantee that a sim is being developed in that state.

New South Wales uses two different colour light signalling systems, both of which have the underpinning principle of UK Route signalling. The network rulebook for both systems is available at the ARTC Network Rules and Procedures website. NSW Railways uses the term "pulsating" to refer to flashing aspects. This is because the lamp alternates between bright (640 milliseconds) then dim (200 milliseconds) as opposed to "flashing" which is lamp on/lamp off for roughly equal amounts of time.

All NSW signals, other than Distant signals, will show two red lamps for a Stop aspect. If the lower Red is mounted directly beneath the upper Red in a vertical alignment, the signal is Absolute and cannot be passed at Stop without permission from the Signaller/NCO. If the lower Red is staggered to the right of the upper Red, it is a Permissive signal and may be passed at Stop without Signaller/NCO authority under certain circumstances. Most Automatic signals have staggered aspects.

NOTE: In real life, if a Permissive signal is at Stop, the Driver must call the NCO/Signaller and request permission to pass it. If the Driver is unable to contact the NCO/Signaller, (s)he may perform a Risk Assessment then, if safe to do so, pass the signal at Stop and keep the train speed under such control that the train can be stopped within half the distance between it and an obstruction (known as "half sighting distance speed"). The train cannot return to line speed until the next signal displaying a Proceed aspect is fully passed. In SimSig, the Signaller must always call the train past the signal (to difficult to simulate real life).

Both signalling systems have a "Medium" aspect, Double Light systems also have a "Preliminary Medium" aspect. The "Medium" aspect can have two meanings, either advance caution, same as a UK Double Yellow, or to warn that the next signal is displaying a Turnout aspect. This resulted in Driver not knowing what the next signal was displaying. To alleviate this, the Turnout Repeater (JP) was introduced. Where a JP is fitted, if the JP is extinguished, the "Medium" is to be treated as an Advance Caution aspect - the next signal will show a "Caution" aspect. If the JP is illuminated, the signal ahead will show a Turnout aspect and the turnout will be set in the direction the JP is pointing.

The first JP's to be installed were the same 5 lamp lunar white junction indicators as used in UK, commonly known as "feathers", "wands" or "Lunar lights". Most have since been replaced by banner indicators displaying a white line of LED's pointing 45° left or right, depending on which way the turnout ahead is set. Turnout Repeaters will not be shown in SimSig simulations.

On the underground lines in Sydney, automatic (Permissive) signals are arranged like Absolute signals (IE: vertical) due to space limitations. Most of these signals have an 'A' plate mounted to the tunnel wall next to the signal. Tunnel signals with an 'A' light will have this indicator mounted on top of the signal. At most underground stations, the Automatic signal at the departure end of the platform is fitted with an 'A' light and has an 'E' Emergency Replacement function. When the Emergency Replacement function is activated, the signal is held at Stop and the 'A' light extinguishes, making the Stop aspect Absolute.

In regional areas, some (not all) automatic signals that protect Ground Frame released points may be dressed as an Absolute signal with an 'A' light. The 'A' light is normally lit and only extinguishes if the Ground Frame has been released or if the signal protects facing points and those points have lost detection. A signal with an illuminated 'A' light in SimSig will show a small cyan aspect in the lowest lamp.

So called because the signal may show a minimum of one single illuminated lamp. Signals are based on a single 3 lamp or LED searchlight signal head which can display red, yellow or green. These individual aspects have the same meaning as in UK but that is where the similarity ends. A pulsating Yellow aspect, called "Medium", bears the same meaning as a UK Double Yellow, but is also used to warn of a turnout ahead, similar to a UK Flashing Yellow (refer use of Turnout Repeaters, above). More details in the diagrams below. Like UK signals, SLCL signals are augmented with ancilliary lamps and indicators to provide further aspects and/or information.

With the exception of Distant signals, a signal that can display a Red aspect has a RED marker light. The Marker is illuminated when:-

- the main signal is showing a Red (Stop) aspect, or

- the main signal has failed.

Because the Red Marker light comes on if the main signal fails, it is not necessary for the interlocking to hold the signal in the rear at Red. The interlocking will, however, restrict that signal to a maximum Yellow aspect. Failed SLCL Stop signals will appear in SimSig with a hollow main head and a lit Red Marker.

So called because the signal must show a minimum of two illuminated lamps. The system was founded on the Home over Distant principle of semaphore signalling but has since evolved into a more complex but informative system of aspects. Most DLCL signals have a two lamp (R/G) signal head mounted over a 3 lamp (R/Y/G) signal head. If the signal protects a junction, the upper signal head will be a 3 lamp (R/Y/G) type as a top Yellow is only displayed for a turnout (either diverging or converging). In both cases, some signals may have fewer lamps, depending on requirements.

When the two signal heads are arranged vertically, the signal is Absolute. When the lower head is staggered to the right of the upper head, the signal is automatic (Permissive).

A comparative of signal aspects 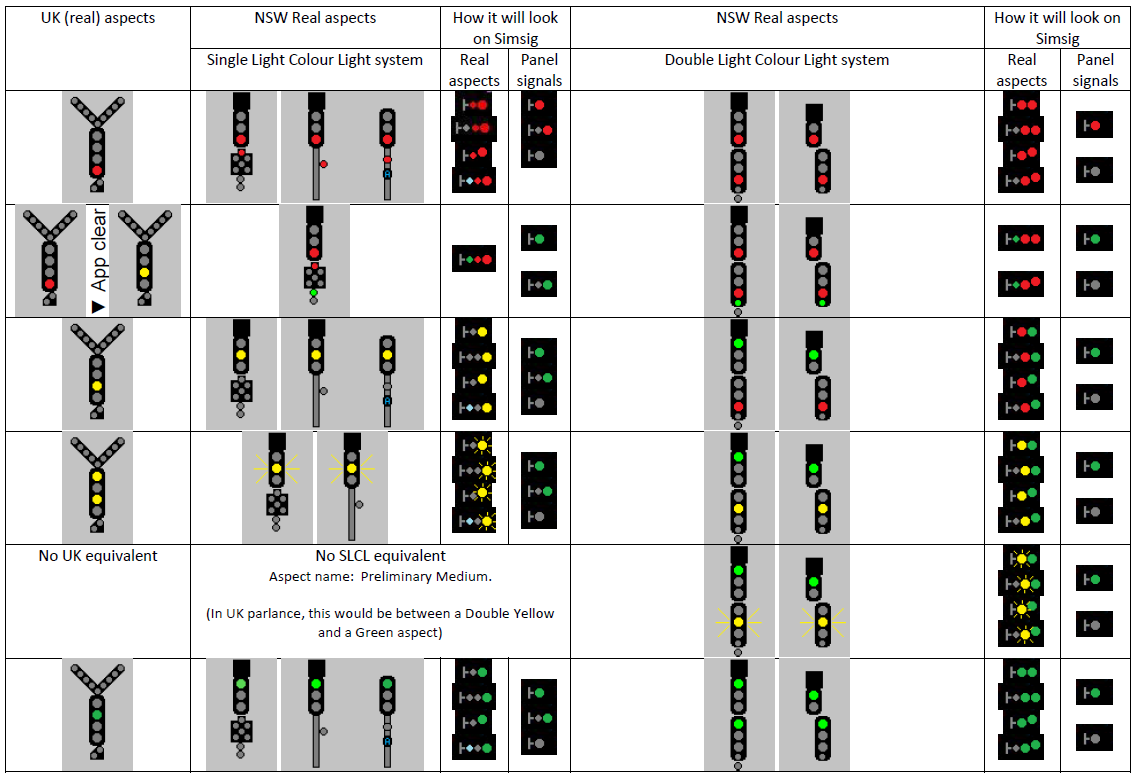 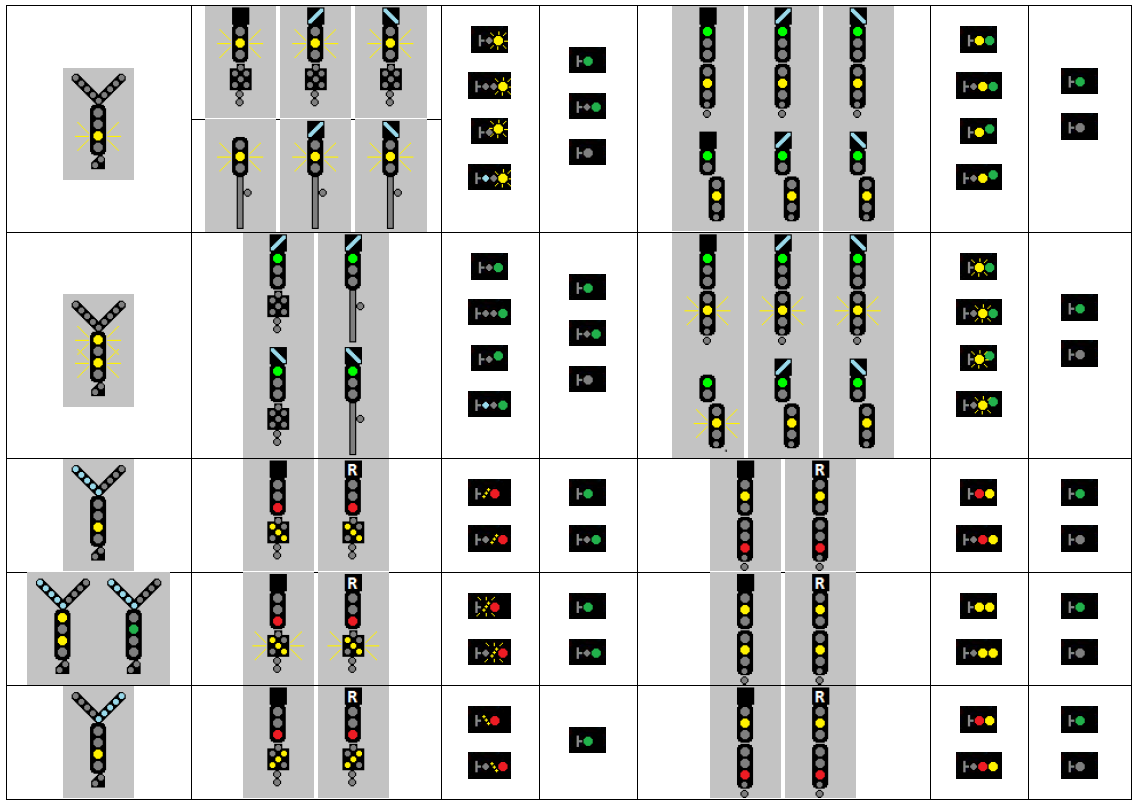 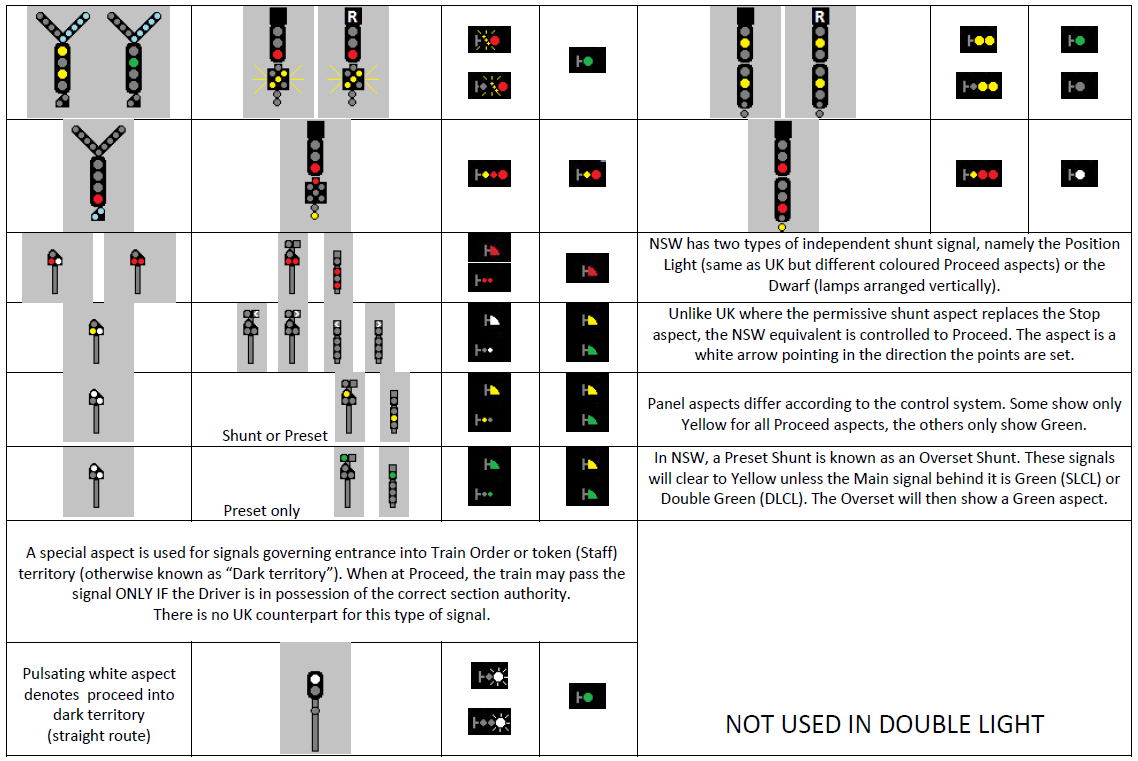