At the start of a timetable, it is highly likely that some trains will be partway through a simulation's control area. To cater for this, trains can be 'seeded' at any signal in the simulation, unless the developer has explicitly prevented seeding at a given signal.

Developers can also enable the exit triangles as seed points for terminus platforms. These can be bespoke labelled, e.g. "Edinburgh P16".

On starting the simulation, trains will seed travelling in the direction of the signal or platform exit triangle. Note that the train will be stopped and will take a few seconds to restart.

In the timetable editor "train detail" screen where you normally enter the entry point, tick the "seed train" check box. This populates the entry field with the list of available signals [seed points].

In this instance we have chosen signal LS5568 (on the Staffordshire simulation). Signals are identified by the letter 'S', followed by their identity as shown in the simulation. Refer to the simulation's Signal Number Plan for signal numbers.

The distance between the train and the signal it seeds at ('Seeding gap') can be changed from the default 15m if required.

Only one train may be seeded at a signal per seed group. Where multiple trains seed in a location (usually a station platform), one train should be seeded, with Divide activities inserted at that location as required. Take care to ensure that the divide activities correspond to the direction in which the train seeds, and the required order of trains in the platform.

Seed groups (new in Loader 4.14) enable a single timetable file to contain multiple seed (or start) times. Previously one would have required one file per seed/start time, with any amendments needing to be made to up to all of those files individually.

Timetables without seed groups are fully supported. There is a default group to which older timetables will belong: this defaults to the selected timetable start time. The Seeding Groups tab in the F4 timetable editor shows a list of custom groups. The "new" button can be used to create a new seeding group which consists of simply a start time.

Each schedule, when selected as a seeding train, now has a further option called "Seeding Group". This allows you to select the default group "(TT Start)" or a custom seeding group.

To create or edit a seed group, open the 'Seed Group' tab in the timetable editor. 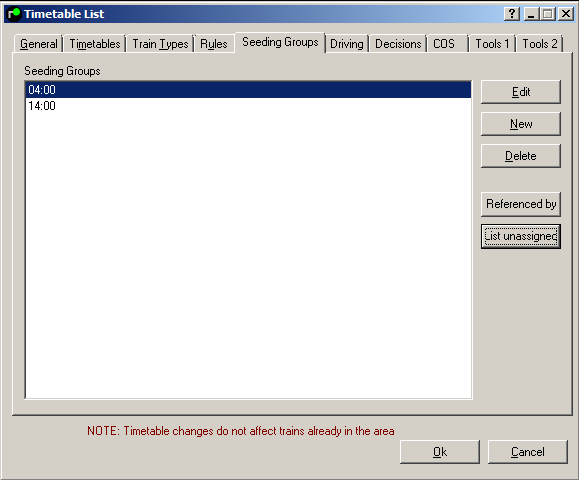 Click a group to select it. The following functions are available:

Edit- Edit the start time of the selected seed group.

Referenced by- Lists trains that are allocated to the selected seed group.

List unassigned- Lists seed groups that have no trains allocated to them.

When starting a simulation, instead of a time entry for the start time on the Timetables tab, a drop-down is now provided which lists the following options:

Rules and Decisions that are interrupted by a Seed Group time

Where a single train is involved

For the single train situation where we have Train A leaving the sim, a seed time in the TT then Train B entering n minutes after Train A has left the sim (and using the 0000 / 0445 seed times) you need to do the following.

If you have two trains entering before a seed time with a choice of entry governed by decision then spawning two other trains to enter after the seed (Train A > Train X and Train B > Train Y) you need to do the following.