Rugby SCC is located to the north-west of Rugby station in a modern two-storey building, on the Up side of the tracks. It houses the SSI and Smartlock interlockings on the lower floor and the operating room on the upper floor, as is typical with such buildings. Six MCS workstations extend across the width of the operating floor with supervisors and MCS overviews behind. The signallers face the railway but cannot actually see it due to the large video wall in between. Originally a number of rear-projection Barco displays were used to display a whole-line overview from London Euston to Colwich Junction but these had a high failure rate and were eventually replaced with regular wide-screen monitors placed on stands in front of the Barco displays. Rugby SCC is one of the very signalboxes fitted with such a wide-area overview, allowing signallers to get a much better picture of what's approaching.

GE 's MCS workstations do not feature Automatic Route Setting as standard but Rugby SCC is being fitted with The Railway Engineering Company 's Signaller's Assistant which is a more advanced version of the traditional IECC ARS. The simulations include SimSig ARS by default but can be switched off on start-up. In real life each workstation can be operated by a single signaller fully manually.

Much of the southern part of the West Coast Main Line has been signalled with prefix identification plates indicating the line of route segment. This helps narrow down the search for a signal. The prefixes are as follows, along with adjacent signal box codes:

The manuals for the three simulations can be found below: 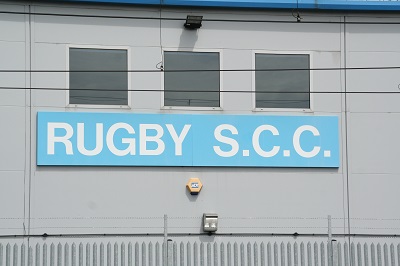 Thanks go to Darren Towler, Paul Biddle, Noel Young, and numerous others for their help in developing these simulations.

The links provided here may be of interest but cannot be guaranteed as to their suitability or continued existence as they link to external sites.