Bristol is the crossroads of the west - traffic from London to South Wales, and traffic from Devon and Cornwall to the Midlands and beyond. The usual traffic diversity means you’ll be constantly regulating the flows to avoid any delays as far as possible.

The entire Bristol ASC is covered on a wide scrollable format, with the additional benefit of Avonmouth Docks (actually controlled by St. Andrews Junction signalbox). This area is controlled by five signallers - Weston, Bristol, Bath, Filton, and St. Andrews.

Services include London - Bristol Temple Meads HSTs, London - Cardiff/Swansea HSTs , Cross Country Voyagers, most of which run through from the South West to the Midlands and beyond; others terminating at Bristol TM. Local services ply the many branches and local stations. Finally freight traffic to and from Avonmouth Docks, the re-opened Portishead branch, and the odd Binliner train. A very diverse simulation where no two hours are the same!

Bristol also features a “modern day” and a “1980s” mode so timetables can be written to allow for the various track changes that have been made over the years.

The lines toward Swindon (Box and Badminton lines) have bi-directional working. To send a train wrong-road to Swindon, first request the slot by clicking on the slot circle at the Swindon end of the line. Then, when the slot has been granted (solid white) you may set the route. Note that Bristol must be chained to Swindon A-B in order for this to work. Similarly Swindon may request the use of wrong-road working. You will receive a message and must click on the slot circle at the Bristol end of the line to grant the release. Again, this will only work when chained to Swindon A-B .

The BHT South inner roads (1 & 2) suffer from a bug where any trains that use them will 'stick' at 0 mph and fail to reverse out. Some timetables do have trains scheduled to use the inner roads, if this the case, you will need to use the loco release (LR) as an alternative.

There is a taxiway across the railway here. Occasionally BAC will phone you up to ask for permission to cross. As an aircraft is being towed, this normally takes about 20 minutes, but can be considerably longer. To protect such movements you must release the ground frame control by clicking on the red circle. When BAC report the crossing clear again, you can right-click on the GF to allow trains to continue.

This signal, at Bathampton Jn, is approach controlled from red if the next signal, B79 is on. This is due to insufficient braking distance between the two signals.

This is worked by a token system. You must grant the token release before a train can proceed onto the single line. In order for the simulation to distinguish the direction for a token request, the route must be set towards Portbury before a down train driver will request a token. The signal will not clear until the token has been removed. Trains from Portbury will telephone for permission to proceed onto the single line and the token machine. Signal B335 will not clear until a train approaches, the token is given back, the crossing is clear, and signal B337 is off.

There are several on Bristol. The majority of the crossings are TEL crossings, however Puxton and Huish are manned by Crossing Keepers . In reality, the three crossings in the Avonmouth area are CCTV and controlled by St. Andrews signalbox, however in this simulation they are treated as Crossing-Keeper supervised. See the section on Level Crossings for details of how to operate all of these.

These are backlit signs mounted just above train height part way along each of the through platforms. They consist of a white backlight and a black cross. Trains must not pass these signs without authority from the signaller. When routing into the station you can route from the west or east gantries all the way to the far end of the platform, or you may route only as far as the blue crosses. If a train wishes to pass a cross without originally being given authority to do so, set a route from the cross to the end platform signal. This replicates the verbal authority given by signallers in real life.

These platform lengths are shown in the below chart. 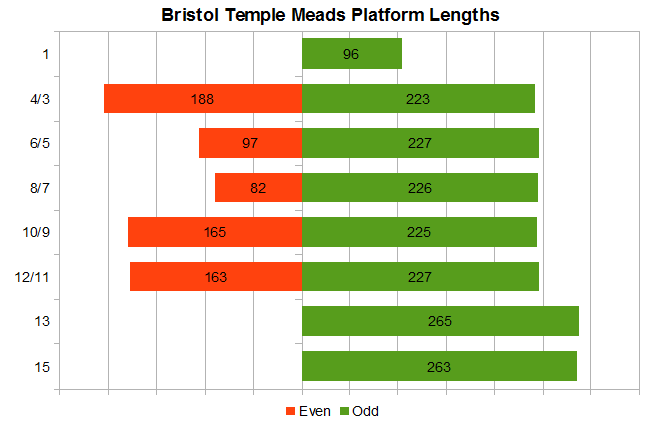 Platform lengths are consistent with those in the 2014 Timetable Planning Rules document.

These are Adobe Acrobat PDF files. If you don't have Adobe Acrobat Reader installed on your computer you can get a free download of the latest version from the Adobe website . Use the built-in Find function (Ctrl+F) to locate signal numbers.

This is a text file listing names of locations grouped by main areas to assist those beginning the sim to locate a train or destination quickly from its Curr/Prev Location entry on the Train List (F2). Open this with Notepad or other plain text editor and feel free to add extra details such as numbers of important signals.

*Fringe box, signals not controlled in this simulation.

Non-prefixed signals controlled by Bristol (B).